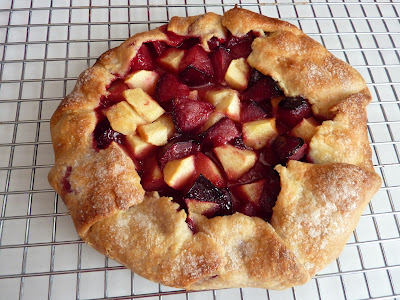 This week’s Tuesdays with Dorie recipe is the Summer Berry Galette. The hosts for this week are Lisa of Tomato Thymes in the Kitchen and Andrea of The Kitchen Lioness. You can get the complete recipe for the galette on their sites. The original recipe for this galette used a mixture of summer berries, but it really works with any fruit. Check out the Tuesdays with Dorie site to see all of the different variations of this recipe.

I really like these free form tarts! They come together without too much fuss and any problems that you have you can just chalk up to it being “rustic.” I made the dough in the food processor, since that is so much easier. I knew that some of the other bakers were having trouble with the dough being too wet because of the sour cream and water in the dough. My husband suggested using cream cheese instead of sour cream, and that work flawlessly. I also used less water, about 3 tablespoons total. The dough was very sticky tight after I made it, but it was fine after an hour and a half of refrigeration. 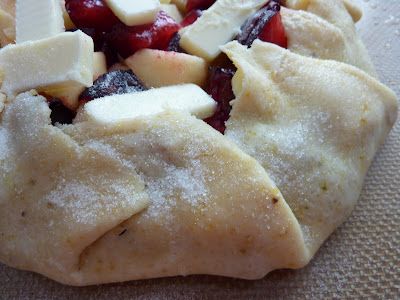 I used 2 plums and an apple for my filling, as that’s what I had at home. I love baked apple anything and I figured the plums would pair nicely with the apple. The plums were fairly ripe and juicy, but I didn’t have much trouble with the galette leaking too much juice. I really liked this tart, although the plums were quite tart. The pastry was beautifully flaky, nice and crispy, too. This was a great recipe and I have the other half of the galette dough in the refrigerator ready to make another tart. I wonder what fruit I will use in that one?

Recipe from Baking with Julia by Dorie Greenspan, page 377

We used Greek yogurt and that worked well, too. Love how many possibilities there are for galettes and how beautiful they are without a lot of fuss.

Your galettes look fabulous. We also used apples and plum and loved the combination of flavors. Also replaced the sour cream with Greek yoghurt, which worked flawlessly.

Looks so delicious!! Plums and apples sound really yummy too!!

What a great Galette you made!

I am "one of those" who had some sticky wet problems. My book said to add the (whole) water to the sour cream...and I followed it literally (what I shouldn't have done)...Well adding a bit (bit bit bit) of flour solved the problem.

This recipe is a keeper.

I like your apple plum combo. I cooked with plums for the first time last year--a TWD recipe and loved it.
Cream cheese in the dough is a great idea. I learn so much from other bakers. Thank you.

How pretty and I'd love to give this a try. I love plums and apples!

That sounds great. I've never tried baking with plums. I should try it this summer.

Lovely combination! Galettes are fun to make. So many possible fusions!