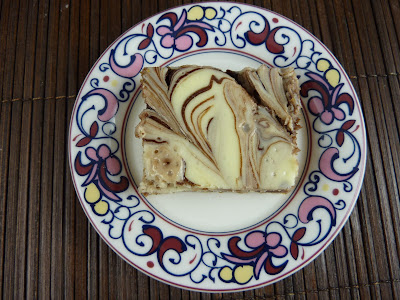 I hadn’t made anything with Nutella lately, and it’s about time! My supply of Nutella was dangerously low and there’s only so many things that you can make with a small amount of Nutella. And since I seem to be completely unable to remember to pick up the jumbo size Nutella at Costco, I’ve been stuck with the half jar I had in the cupboard.

This recipe calls for just 1/4 cup Nutella, but I didn’t really measure it. I’m pretty sure I used a little more than that, but it was fairly close. It’s surprising that the recipe uses so few ingredients. It seems like when I look at cheesecake bar cookies they always have tons of ingredients. This has a simple graham cracker crust and the filling is quite simple. I warmed the Nutella in the microwave for 30 seconds to make it easier to swirl in.

These looked great coming out of the oven, and the only downfall that I can think of is that they are fairly tricky to cut. I refrigerated them for several hours, so I don’t think that was the issue. I think I baked them the right amount of time; maybe these are just kind of sticky! The flavor in these is just wonderful, with the Nutella flavor comes through nicely. Very tasty!

In a medium bowl, combine the graham cracker crumbs, butter, flour, and brown sugar. Press into the bottom of the prepared pan. Bake 10 minutes or until set.

While the crust bakes, make the cheesecake filling. In a large mixer bowl, beat the cream cheese and sugar until smooth. Mix in eggs and vanilla.

Spread the filling evenly over the crust. Spoon the Nutella in drops randomly across the top of the cream cheese filling. Using a knife, swirl Nutella into the filling.

Bake for 20-22 minutes, until filling is just set. Cool for an hour and then refrigerate until completely chilled. Using a knife dipped in hot water, cut into bars. Refrigerate.

Recipe from Bake or Break

These look delicious. I have company coming this weekend. The Nutella is already out--looks like I'll make this Cheesecake Swirl Bar! Yummy.