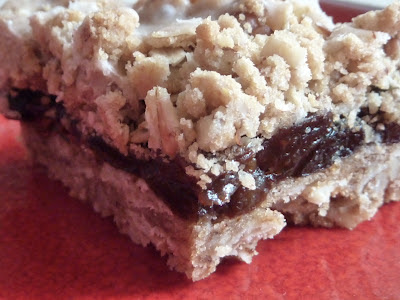 I mentioned a while ago that I was spending more time at my parent’s house and had brought all of the ingredients I needed to bake while I was there. Well, this time, I wanted to see what I could bake with what they had on hand. I figured I might need to go to the store to get a thing or two, but my challenge was to buy as little as possible. They had flour and sugar, oats, raisins, and one stick of butter. (Margarine too, but I don’t like to use that.) Their baking soda and powder were old, but I tested them to see if they were still good. The baking powder was dead, but their baking soda was still working.

I settled on baking these raisin bars. I had asked Dad if they had bourbon, and he said yes. I looked in the bar of their house (yes there’s a bar) and I did find bourbon: Jim Beam bourbon in a collector’s bottle that was probably over 30 years old. Good stuff! I did have to buy brown sugar and nuts, but not too bad! Mixing these isn’t too bad, but I’d overworked my mom’s mixer when I made the bread last time, so this was mixed by hand. Sorry Mom, we’ll fix your mixer!

Boy, raisins, bourbon and cinnamon simmering on the stove sure smell wonderful! The base and the topping of these bars seem really dry and crumbly, but it comes together when you bake them. And they were super easy to cut. I inverted the pan on a cutting board and it came out in one piece, making it easy to cut into nice looking bars. These are old-fashioned, but they are great! I love the raisin filling, and it reminds me of cookies that grandma used to make. I don’t think you can taste the bourbon that much, but it does add richness to the filling.

In a medium saucepan combine the sugar, cornstarch, water, bourbon, raisins, and cinnamon. Stir to combine. Over medium heat, bring mixture to a slow boil and cook until mixture has thickened and is no longer cloudy, about 3 to 5 minutes. Stir mixture often, making sure the bottom is not scorching. Remove from the heat and let cool while you prepare the crust.

In a small bowl, whisk together flour, baking soda, and salt. Set aside. In a large mixer bowl, cream together the butter and brown sugar. With mixer on low, beat in flour mixture. Stir in oats, chopped pecans, and 1 tablespoon of water. Mixture will be crumbly.

Press 1/2 of the mixture into the bottom of the prepared pan. Evenly spread slightly cooled raisin filling over the crust. Mix another tablespoon of water to the remaining crumb mixture and then crumble over the raisin filling. Gently press down.

Bake for 35 minutes until golden brown. Remove from oven and let cool completely.

Prepare the icing: whisk together the powdered sugar, cinnamon, and milk, adding enough milk to thin the icing to drizzling consistency.

Recipe from Fork vs. Spoon
Posted by Nicole at 6:00 AM