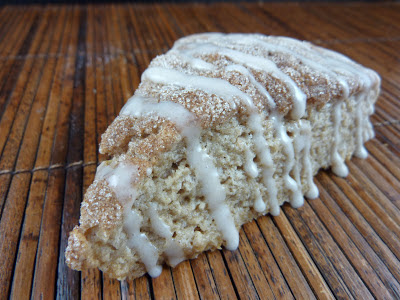 It’s been a while since I made a snickerdoodle creation, and I thought these just looked fabulous. I forget how quick and easy scones are to put together; I don’t know why I don’t make them more often. One thing about scones is that you typically need to serve them right away. I usually bake in the afternoon and evening and don’t usually have somewhere to take them right away. I don’t want to serve anything but the best!

I had all of the ingredients for these on hand, which I can’t always say is the case for scones. Most scones use heavy cream, and sometimes I have that and sometimes I don’t. I did have it on hand, but these use sour cream instead, which probably helps give the scones that little tang you expect in a snickerdoodle. I appreciated that you cut in the butter with a food processor as I hate doing that by hand! It just seems like I work the dough too much and never get the butter evenly distributed when I do it by hand.

This dough was just so crumbly and I knew it would never come together with just the sour cream and egg, so I added a splash of heavy cream to help the dough come together. This helped tremendously but I was worried that I had manhandled the dough too much and that the scones wouldn’t rise. The dough was fairly forgiving and rose nicely, so that was a relief. I don’t know if it is the sour cream or what, but these scones stayed fresh for several days. Usually scones are rock hard by the next morning. I loved the flavor of these, I loved that the dough was forgiving, and I loved that these stayed fresh. A winner all around!

Preheat the oven to 350 degrees. Line a baking sheet with a silicone baking mat.

In a small bowl, whisk together the sour cream and egg; refrigerate until needed.

In a large food processor, pulse together the flour, sugar, baking soda, baking powder, cream of tartar, salt, cinnamon, and nutmeg. Add the butter and toss with a fork to cover. Pulse until the mixture looks like coarse cornmeal flecked with pea-sized bits of butter, about 10 to 12 pulses. Transfer mixture to a large mixing bowl.

Add sour cream mixture to flour mixture; fold with spatula until just combined. Add heavy cream if the mixture is too crumbly. Transfer the dough to lightly floured surface and knead dough just enough for it to hold together. Shape into an 8-inch circle. Sprinkle with cinnamon sugar. Cut the dough into 8 wedges with a pizza cutter.

Separate and place the wedges on the prepared baking sheet and bake 15 to 18 minutes until golden brown. Transfer to a wire rack to cool.

Make the glaze: combine the powdered sugar, milk and cinnamon in a small bowl and whisk until combined. This glaze should be fairly thick. Drizzle over the slightly cooled scones.

Recipe from Sweet Pea’s Kitchen
Posted by Nicole at 6:00 AM

Since scones are my favorite food group I'll try these soon. They do look deliciois.