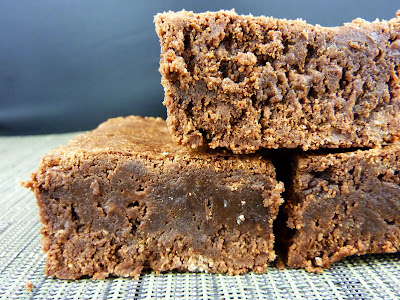 The recipe for these brownies, as written seems unnecessarily complicated, where you mix some of the sugar to the chocolate, some to the eggs, and add them at different rates to get the complete batter. It seems like you could mix everything together and perhaps the results wouldn’t be much different. I don’t know, as I did follow the recipe as written. Many had trouble with the brownies being baked in the time given in the recipe. I baked them for the longer end of the time spectrum and they were done, but still fudgy in the center.

Honestly, what worried me the most about this recipe was that you weren’t supposed to grease the pan. How on earth would the brownies come out? Well, the first one was tricky to remove from the pan, but the rest did come out with little problem. And the one that broke a bit when removing from the pan I just stuck back together. Thank goodness for fudginess! The flavor in these is pure, undivided chocolate and I really like that. Someone asked me what flavors were added and I said none, well, other than vanilla. These are a very good, classic fudge brownie. They also keep well, being so fudgy. Are they the best ever? I don’t know but they sure were good!

Recipe from Baking with Julia by Dorie Greenspan, page 331
Posted by Nicole at 6:00 AM

Nicole, your "Best-Ever Brownies" look wonderful - they have a delicious dark chocolaty color and a perfect crumb - just the way brownies should be! I am glad that you enjoyed these rather fudgy brownies so much!

I love all this fudgy-ness! Your brownies look lovely! :)

Best ever or not, these were good!
I was worried about getting them out as well - parchment paper saved the day!

These were fudgy good. Definitely my go to - for now!

So delicious! We were leaving town and I still had a half of pan. I cut them up in small 1/2 inch cubes and put them in the freezer. They are delicious stirred in vanilla ice cream! This could just be the 'best ever'!