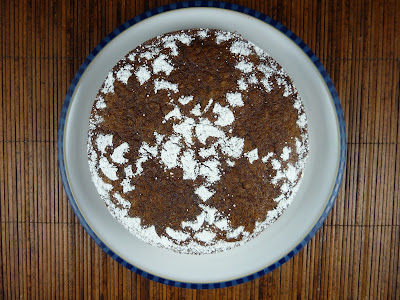 I’m still trying to use up some pears that I had at home, and I came across this coffee cake and had an idea. I have used mincemeat instead of applesauce in another coffee cake recipe, so I thought about making pearsauce with the pears I had on hand. I’d never made apple or pearsauce before, but I knew it was fairly simple. I searched and found this recipe where you just cooked pears with a cinnamon stick. It only took about 15 minutes and it made the house smell fantastic.

Once you’ve made the sauce (and of course you could use store-bought sauce), it takes no time to make. Making this on an evening when I was trying to get so many other things accomplished, I was trying to be as quick as possible. It takes about 10 minutes for my oven to get to temperature, and I was spreading the batter in the pan just when my oven beeped to let me know it was at temperature. Perfect!

You could top this with icing if you want to make it a little fancier, but I just went with a powdered sugar topping. I took it to work so I hadn’t tasted it, but I did sneak a couple of crumbs from when I took it out of the oven and they were very tasty. This isn’t a large cake, but that’s ok. I think this would be nice served for breakfast, maybe Thanksgiving morning?

Make the pearsauce: peel, core and dice the pears. Place in a medium saucepan with the cinnamon stick. Add enough water to cover the pears. Cook on medium until the pears are soft. Drain the extra water and mash with a potato masher. Measure 1 cup (reserve any remaining sauce for another use). Refrigerate the sauce until cool.

Preheat the oven to 400 degrees. Grease an 8-inch round cake pan and line the bottom with waxed paper.

In a large mixer bowl, cream the butter, sugar, and brown sugar. Add the egg and vanilla and beat until well combined.

In a small bowl, combine the flour, baking soda, cinnamon, nutmeg, and salt. With the mixer on low, add the flour mixture a bit at a time, mixing just until combined. Stir in the 1 cup pearsauce.
Pour the batter into the prepared cake pan and smooth the top. Bake for about 25 minutes, or until a toothpick inserted in the center comes out clean.

Allow to cool for 20 minutes in the pan. Remove from the pan and cool on a wire rack, or serve warm. Dust with powdered sugar before serving.