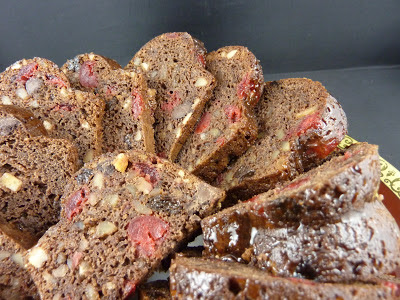 Merry Christmas! I know that most people are terribly afraid of fruitcake, and in the U.S. it has become something of a holiday joke. I really like fruitcake and wish that more people would give it a try. My husband usually makes the fruitcake/Christmas cake in our household. It usually gets made in fall sometime and then ages (with liberal dousing of alcohol) until Christmas. It’s REALLY good by Christmas.

We didn’t make a Christmas cake this year as we knew we would be traveling at Christmas. I wanted to make something and long ago I had pinned this recipe and thought I would give it a try. It is the opposite of the traditional fruitcake in that it bakes very quickly, as it begins with a cake mix, and you can serve it right away, but it still has many of the elements of traditional fruitcake: spirits, dried and candied fruits.

This recipe lends itself to variations: I used walnuts and not pecans, regular raisins and not golden ones, and I used a small contained of candied mixed peel instead of candied pineapple that the original recipe specified. I also used Gingerbread Kahlua for the spirit. You could use anything, although I think sherry or brandy is most traditional. This cake is great; it’s not quite as heavy as traditional fruitcake, but you still get many of the same flavors. The chocolate is different but I thought it added a lot to the cake.

In a large mixer bowl, combine the cake mix, spirit, sour cream and egg. Beat on low speed until combined and then beat for 2 minutes on high speed. Stir in the nuts, raisins, cherries, candied fruit and chocolate chips.

Pour the batter into the prepared pan. Bake for 50 to 60 minutes, or until a thin knife inserted in the cake comes out clean. Cool for 20 minutes in the pan and then turn out on a rack to cool completely.

Warm the honey and brush on top of the cake for a glossy finish. Slice thinly.

Recipe from Ezra Poundcake
Posted by Nicole at 6:00 AM

Oh, I love this cake! Mom's been making it for our family Christmas for at least 20 years. You did a really beautiful job with it. So glad you liked it, too!