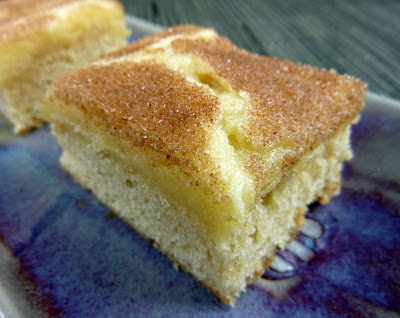 I follow a cooking discussion board and I am so inspired by all of the wonderful cooks and bakers who post there. That’s where I discovered the recipe swaps that I participate in. It’s really nice to see that real friendships have formed with those met online. I don’t think there are too many members of the list who live in my area, which is too bad. I’d really like to meet some of these ladies.

Josie’s blog Pink Parsley is one of my favorites. Her posts always look so good. She posted these bars a while ago and I immediately knew that I had to make them. I love anything snickerdoodle-like and these fit the bill. They have all the elements of a snickerdoodle bar cookie, plus the addition of a gooey layer. I think this is similar to the gooey butter cake that St. Louis is known for. I have only visited St. Louis for a long weekend and didn’t have a chance to try it while I was there. Gooey anything is pretty great, and combined with snickerdoodle? How can you lose?

This recipe has the potential of messing up lots of dishes, but I mixed the cookie base and the gooey layer in the same mixer bowl. I always have cinnamon sugar already mixed, so no dish to clean there! These come out of the oven super puffy and then as they cool they deflate some. I tried to cut these when they were cool, but they were sticky so I decided to refrigerate them. They cut beautifully, and once they came to room temperature, they were perfectly gooey. I loved these bars: snickerdoodles combined with a creamy, decadent topping.

Preheat the oven to 350 degrees.  Line a 9”x13” cake pan with foil and spray with cooking spray.

Prepare the cookie base: in a large mixer bowl cream the butter and sugar until light and fluffy. Add the egg and milk and beat until combined. In a small bowl combine the flour, cream of tartar, baking soda, salt and cinnamon. With the mixer on low, stir in the flour mixture, beating until just combined. Spread the cookie base over the bottom of the prepared pan with an offset spatula.

Prepare the gooey layer: in a small bowl, whisk together the corn syrup, milk, and vanilla. In a large mixer bowl, cream the butter, sugar, and salt until light and fluffy.  Beat in the egg.  Add 1/3 of the flour and mix, followed by half the corn syrup mixture, mixing well to combine.  Repeat again, twice, until all of the flour has been added and mixed until just combined.  Spread the gooey layer carefully over the cookie base. Sprinkle with about 2 tablespoons cinnamon sugar.

Bake 25 to 30 minutes until the cookies have bronzed on top.  The gooey layer still be a little soft (gooey!) under the browned cinnamon crust. It’s better to under bake these than over bake them.  Allow to cool completely before cutting  into squares.

Recipe from the Smitten Kitchen Cookbook, via Pink Parsley
Posted by Nicole at 6:00 AM