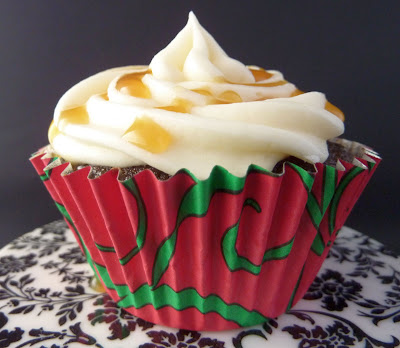 I know, St. Patrick’s Day has come and gone, but these cupcakes are really great and you could make them anytime. And I used American Honey Whiskey so they aren’t Irish at all! We did make these for St. Patrick’s Day dinner (which we had a not-so-traditional dinner at Red Robin), but I think these would be good for any adult oriented party.

Like the chocolate beer cheesecake I made recently, these taste better after the flavors have had a chance to mingle. I thought that you could taste the stout (oatmeal stout in this case) and the whiskey (American Honey Whiskey) much more the next day. The frosting is very sweet. The cupcake in the photo has a lot of frosting, and honestly I liked eating the cupcake that had less frosting. I’m totally a frosting girl, too, so I’m not sure why this tastes so very sweet. Maybe the type of whiskey I used?

These cupcakes came from a vegan blog, and I have made some changes, but the cupcakes themselves are still vegan. I wasn’t sure how they would turn out, as they had no egg in the batter. They were really good, but they didn’t rise quite as much as expected. The cupcake itself was light and had great texture, so if you’re looking for a vegan cupcake, this is an excellent choice. I made the buttercream non-vegan, with butter and milk, but you could certainly substitute if needed. I liked that this vegan recipe used common ingredients, as so many specialty blogs use ingredients that might not be readily available. Thanks for the great recipe Chef Chloe!

In a large bowl, whisk together the flour, brown sugar, cocoa powder, baking soda, and salt. In a separate bowl, whisk together stout, oil, vinegar, and vanilla. Pour the stout mixture into the flour mixture and stir with a spatula to combine. Do not over mix; the batter may be slightly lumpy (and a bit fizzy!).

Fill the cupcake liners about nearly full with batter, as they don’t rise a great deal. Bake for 16-18 minutes, or until a toothpick inserted in the cupcake comes out clean. Cool in the pan about 10 minutes and then remove to a wire rack to cool completely.

Make the frosting: in a large mixer bowl, beat the butter until smooth. Add the powdered sugar, vanilla and 1 tablespoon milk and stir to combine. Add more milk, as needed, until the frosting is a spreadable consistency. Add the whiskey and beat on high until light and fluffy.

Spoon the frosting into a piping bag fitted with a large fluted tip. Pipe the frosting on the cooled cupcakes. (Or just frost the cupcakes with a small metal spatula.) Drizzle with caramel, if desired.

Recipe from Chef Chloe
Posted by Nicole at 6:00 AM