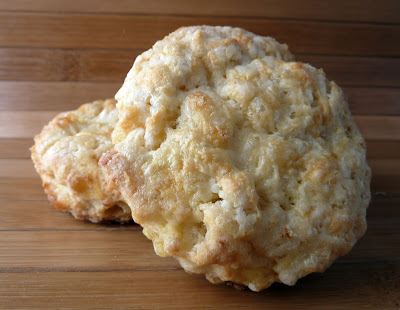 My husband sent me this recipe for apple and cheddar scones, and I was intrigued. Apple scones sounded good. I know that savory scones can be great. Apple and cheddar are a natural pair. But I wasn’t sure what they would be like together. I had a little bit of cheese left over, just the right amount for this recipe, so I decided to give it a try.

Scones have to be eaten as soon as they come out of the oven. Thankfully scone recipes are usually quick and so you can make them up and serve fairly quickly. This scone requires a little more work, with cooking and cooling that apple/sugar mixture, then allowing the scone dough to chill. I made the apple/sugar mixture the night before, so the prep was quicker in the morning. The original (British) recipe called for 2 apples, but I know the apples I get in Washington State are much larger so I just went with one large apple. It seemed to be the right amount for the dough. Too much apple mixture and the dough wouldn’t have come together.

I just patted out the dough instead of rolling it out, which was very easy. I made one dozen scones with this recipe, cutting them in 3” rounds. These scones are interesting. I think they taste a bit, I don’t know, eggy? I like the apple and cheddar. I think they would be good served with soup, maybe squash soup or something like that. I think they would be better with a stronger cheddar, as the one I used was quite mild.

Put the apple and sugar in a small saucepan. Cook on medium, stirring frequently, until the apple is tender.   Transfer to a small bowl and allow to cool completely.

In a large mixer bowl, add the flour, baking powder, and butter. Mix until crumbly. Add the cool apple mixture, cheddar, and one egg; mix until the dough comes together loosely. Add the second egg and cream; mix just a bit more, until a shaggy dough forms. Form the dough into a flat disk, wrap in plastic wrap and refrigerate for 30 minutes.

Preheat oven to 350 degrees. Line a baking sheet with a silicone baking mat.

Place the dough on a floured surface and pat into a ½” thick round. Using a round cookie cutter, cut scones and place them on the prepared baking sheet. Reshape the scraps of dough and cut additional scones.

Brush the scones with cream and sprinkle with a little grated cheddar.  Bake for 20-25 minutes, until golden. Allow to cool slightly before serving.

Recipe from Multiculti Kitchen
Posted by Nicole at 3:00 AM