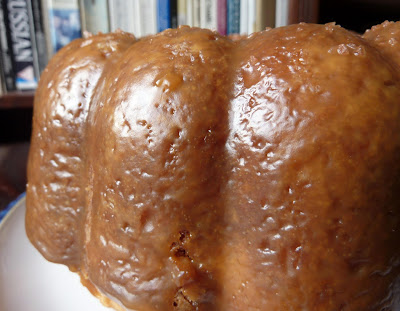 I love Bundt cakes! It seems like I post so many Bundt cakes but they are so easy and travel so well. At work, we were having a going away party and I wanted to make something special. How do you make a Bundt cake special? I looked through my recipes pinned on Pinterest, and cake across this one. The answer: enrobe the entire cake in caramel. Yum!

This cake has a few other special elements: vanilla bean seeds and toffee chips hidden in the center of the cake. I don’t normally use vanilla beans, because they can be expensive and I don’t typically have them on hand. I went to the grocery store and looked at the vanilla beans in the bulk section. It’s pretty scary, as they were over $60 a pound, but think about how little a vanilla bean weighs. I got my lovely, organic vanilla bean for 61 cents! I was so excited as I knew the tiny vanilla bean seeds in the cake would look great.

Reading the original recipe, I wasn’t sure about the timing of making the caramel. I let the cake bake and then made the caramel, so that the cake had some time to cool. I also wanted the caramel to cool just a little bit (and thicken a bit) before I used it to cover the cake. Do give the caramel your full attention when you are making it. It can burn so fast! I didn’t have any problems this time but the last time I made caramel I was also trying to do laundry and that didn’t work. While I hate that we are having a going away party at work, it’s nice to be able to share this cake with my work friends.

In a medium bowl, combine the flour, baking powder, baking soda, and salt. Set aside. In a large mixer bowl, beat the butter until creamy. With the mixer running, gradually add the sugar. Beat until light, about 3 minutes. Add the eggs, one at a time, beating for one minute after each addition.  Stir in the vanilla bean seeds.

Spread half of the batter in the prepared pan. Sprinkle with the toffee chips and then spread the remaining batter over the chips. Smooth the top.

Bake for 50 to 60 minutes, until a tooth pick inserted in the center comes out clean. Cool the cake in the pan for 10 minutes, then invert it onto a wire rack to cool completely.

Once the cake comes out of the oven (giving it time to cool) make the caramel: place the sugar in a large heavy saucepan. Have the butter and cream out and measured, ready to go. Heat the sugar over medium high heat. As the sugar melts, swirl the pan to keep the sugar from burning. Watch the caramel sugar carefully, as it can burn in a matter of seconds. Once the sugar has melted and is a copper color (this happened as soon as the sugar melted) add the butter and stir until it melts. The mixture will bubble and boil. Remove from the heat and stir in the cream. Again, the mixture will bubble and boil and may seize up. Whisk until the caramel is smooth. Transfer the caramel to a bowl. Allow to cool slightly.

Pour and/or spoon the caramel over the cooled cake. You want the caramel to completely cover the cake, so you may need to “coax” the caramel a bit to cover hard to reach areas. Sprinkle with sea salt.

Recipe from Week of Menus
Posted by Nicole at 3:00 AM

I'd like to invite you again to the CookEatShare Author Network. I don’t want the over 1 million unique monthly visitors to CookEatShare.com to miss out on your wonderful food.

By joining our Author Network, your blog posts will be indexed and users will be guided to your actual blog when searching your recipes or profile.

The service is free and easy to sign up for. Simply visit www.cookeatshare.com/blogs/apply or contact me at Kyra@cookeatshare.com. You'll get a unique link to claim and customize your profile. We look forward having you in our network!

If you’re not interested simply put “No Thanks” in the subject and e-mail Kyra.