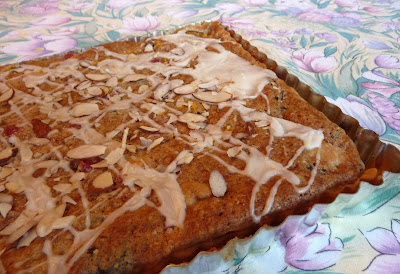 For Easter dinner, I made this Simnel Bake. A Simnel cake is traditionally served in England around Easter. It is a fruit cake, usually with marzipan. It is traditional to top the cake with 11 balls of marzipan, to represent the 11 apostles (but not Judas). This tart is a variation of the Simnel Cake, with the flavors of the cake put into a pastry shell. It’s also quite similar in some ways to a Bakewell Tart, which is a pastry shell filled with a layer of jam and topped with an almond filling.

I left off the balls of marzipan to represent the apostles because that seemed so…different. You can use which ever dried fruit you like, I used a combination of raisins and dried cherries. The original recipe called for candied cherries, but I use maraschino cherries instead and they work just fine. This recipe also called for “mixed spice” which some Google-ing revealed to be a combination of cinnamon, allspice and nutmeg. As this is a British recipe, I’ve converted the weights and temperatures, so they may seem a little strange.

This tart is really fabulous. It reminds me a lot of Christmas cake (which is a different fruitcake). The dried fruit, cherries, and the marzipan is very sweet. You want to cut it in small pieces (which we didn’t do for Easter dinner!). I’ve really enjoyed making some of these traditional British desserts, and I hope that you consider giving them a try.

Preheat oven to 390 degrees. Line the pastry filled tart pan with foil and fill with baking weights. Bake for 15 minutes; remove the foil and bake for an additional 8-10 minutes until the pastry is golden. Allow to cool while you make the filling.

Reduce the oven temperature to 340 degrees.

In a large mixer bowl, cream the butter and sugar. Add the eggs, one at a time, beating after each addition. Stir in the ground almonds, dried fruit, cherries, orange zest, cinnamon, allspice, and nutmeg.

Spread the cherry jam in the bottom of the tart, top with the cubes of marzipan. Carefully spread the butter/fruit mixture over the jam and marzipan.

Bake for 35 minutes until golden. Cool before icing.

Make the icing, in a small bowl, combine the powdered sugar and enough orange juice to make a thick, smooth icing. Drizzle on top of the cooled tart. Garnish with orange zest and sliced almonds.

Recipe from BBC Good Food
Posted by Nicole at 6:00 AM