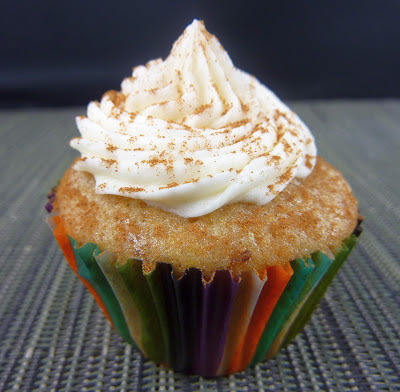 I love French Toast, and when we go out to breakfast on the weekend I will often order it for breakfast. I’ve found that French Toast varies quite a bit from place to place: sometimes the bread is thick, sometimes regularly sliced. Sometimes it’s eggy-ier than other times. Almost always, maple is a prominent flavor (although I like fruit toppings, too). This cupcake works to replicate those flavors.

I made these as mini cupcakes, and it makes so many, four dozen! I probably could have made a couple more, but I figured four dozen was plenty. What I do need to do is go to the store and buy some non-seasonal cupcake liners. I looked at the selection I had at home and I only had holiday liners. Don’t be fooled; the colorful stipe liners have a bat on the bottom of the liner. But the cupcakes are good so hopefully you don’t notice the unseasonable cupcake liners.

The cupcakes are flavored with a little maple syrup. What makes them French Toast-like is that you brush the baked cupcakes with an egg wash and then broil them momentarily. This gives the cupcakes the slightly more eggy taste. They aren’t super eggy, so don’t worry, but the addition of the egg wash adds quite a bit. The frosting also is maple flavored, via maple extract. (It’s really hard to find non-imitation maple extract!) I loved these and I think the maple tastes even better after they have had a couple hours for the flavor to come through.

In a large mixer bowl, beat the butter and sugar until light and fluffy. Add the applesauce and the egg yolks and stir to combine.

In a separate bowl, mix the flour, baking powder, salt and cinnamon. In a large measuring cup, whisk the maple syrup, vanilla and milk. Add the flour and milk mixtures alternatively to the butter mixture, starting and ending with the flour. Mix until fully combined.

Fill the paper liners about ¾ full. Bake for 10-12 minutes, until a toothpick comes out clean. While the cupcakes bake, make the egg wash: In a small bowl, whisk the egg, 2 tablespoons of milk, and 1 teaspoon cinnamon.

Turn off the oven and preheat the broiler.

Once the cupcakes are done, take them out of the oven and brush with the egg wash. Broil for 1-2 minutes, until the mixture is fully cooked. Allow the cupcake to cool in the pan for 10 minutes before removing to a wire rack to cool completely.

Make the frosting: in a large mixer bowl beat the butter and powdered sugar until light and fluffy. With the mixer running on low, stir in the milk and maple extract. Pipe or spread the frosting on top of the cooled cupcakes. Sprinkle with cinnamon.

Recipe from Erika Eats
Posted by Nicole at 6:00 AM