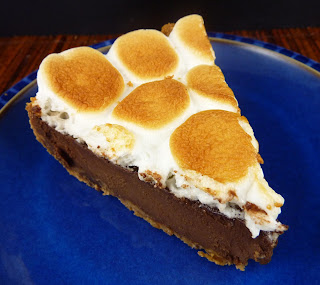 I like s’mores quite a bit, although I think I like the s’mores baked creations I’ve made more than traditional s’mores themselves. I’m fairly picky about for done I like fire roasted marshmallows. I was not the kid who put the marshmallow into the fire and waited for it to start flaming. I did not like one bit of burnt on my marshmallows at all. So as a kid it was easier to just eat the graham crackers and the chocolate bar by themselves. I’m glad I have been able to recreate those flavors in easier to eat forms.

This pie wasn’t too bad to put together, but it did have several stages. My graham cracker crust was so crumbly before baking and I worried it wouldn’t hold together but it was fine after baking. I’m not sure how long my filling baked: much longer than the 15-20 minutes the original recipe stated. I’m sure I baked mine for 30 minutes or more. Just keep checking it until it isn’t jiggly. The marshmallows on top, you do have to be careful or they will burn. I set my oven timer for 2 minutes and I checked at one minute 40 and they were just starting to smoke. 2 seconds longer and they would have been too done for me. 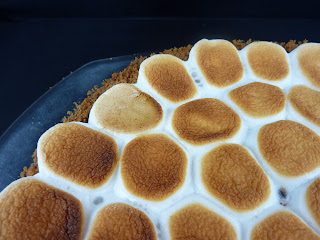 I’d been planning to make this pie for quite some time now, as I had most of a bag of large marshmallows on hand. I finally ended up making it for Memorial Day, and it was the prefect dessert to have after dinner. You can make it in advance and just have it ready in the refrigerator when you need it. The rich, not super sweet chocolate filling balances the pure sugar rush of the marshmallows. This dessert looks impressive and tastes just as good.

Preheat oven to 325 degrees. Have a 9-inch pie pan ready.

In a medium mixing bowl, mix together the graham cracker crumbs and melted butter until the mixture comes together. Press mixture onto the base and sides of the pie pan, pressing firmly.

Bake for 8-10 minutes, until fragrant. Remove from the oven, but keep the oven on.

In a saucepan, warm the heavy cream and milk over medium heat. Add the chopped chocolate and stir until the mixture is smooth smooth. Stir in the pinch of salt. Remove the mixture from the heat and add the whisked eggs a little at a time, whisking after each addition. Pour the chocolate filling into the partially baked crust.

Bake for 20-30 minutes, until chocolate filling is set and does not move when pie is lightly shaken. Remove from oven. Turn off the oven but preheat the broiler.

Chill for several hours before serving. Cut with a sharp knife sprayed with non-stick cooking spray. For optimal flavor, after cutting into pieces, microwave pieces of pie for 10 seconds before serving.

Recipe from Pastry Affair
Posted by Nicole at 6:00 AM