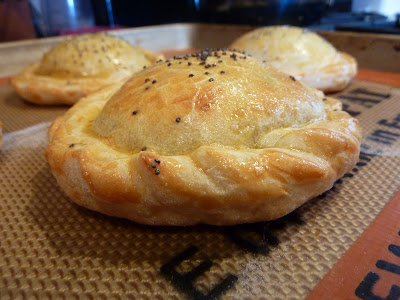 This week’s Tuesdays with Dorie recipe is Savory Brioche Pockets. Our host this week is Carrie of Loaves and Stitches , and you can head over to her blog to get the recipe for these pockets. Also, don’t forget to check out the links for all the TWD bakers over on the Tuesdays with Dorie blog . This recipe is wide open for variations so I’m excited to see what combinations people came up with.

Most cultures in the world have some sort of pocket pastry will filling. Russia has piroshky, England has pasties, Latin countries have empanadas, Asian countries have dumplings. Sure, there are differences but the idea is the same. This recipe uses super rich brioche dough, filled with potato, goat cheese, onion and peas. I don’t like asparagus that much so I used peas instead. I was a bit unsure about making these, but I have made piroshky before so I just tried to remember what it was like making those. Surprisingly, these came together so easily. I was super thrilled. 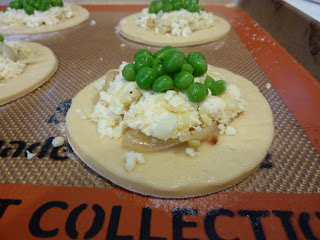 Thankfully, I had made brioche dough a while ago and had frozen half the batch. I used that here. My dough had been in the freezer a while so perhaps it didn’t rise as much as it could have, but I think they turned out great. I really liked the filling and I think the peas were a great touch. My husband kept calling these pasties, which they are pretty much. These would have taken a whole lot longer had I had to make the dough, so I guess it’s never a bad idea to make some dough and have it ready in the freezer!

Recipe from Baking with Julia by Dorie Greenspan, pages 421-422
Posted by Nicole at 6:00 AM

Great looking brioche pocket! I loved these and think there are so many variations that could be used for the filling.
It is a good idea to have dough waiting in the freezer...makes the process seem less daunting to do all in a day.

Looks great! I wish I had these time consuming doughs already in my freezer! I would have made them by now. Soon. Very, very soon.

I think these would be much more do-able if there was already dough in the freezer. We really enjoyed them, too, but they were time-consuming.