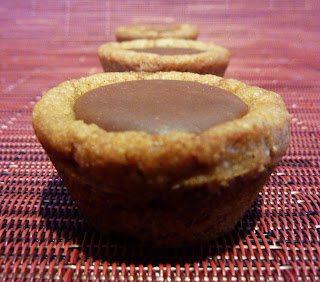 So my husband and I both have iPhones and we share an iTunes account. That means that whenever he adds an app to his phone, it usually ends up on mine, too. For some things, that’s fine. I do end up with a lot of computer networking and other computer diagnostic type tools, too. Thankfully, apps are pretty easy to delete when you want to! But I have to say that I have a lot more apps on my phone than I realize. I was looking through apps the other day and realized I had an All Recipes app with a recipe spinner.

Now, the spinner seems to be more suited for someone who is trying to figure out what to have for dinner, but cookies was one of the options. You could then choose an ingredient to narrow it down, but chocolate was the only logical choice. Fish cookies? No thanks. I gave it a whirl and looked through the results. Nothing too unusual, but there was the recipe for Fudge Puddles, which looked good. I thought I could adapt it and make it something really great.

I changed the peanut butter in the dough to Biscoff spread and instead of making just chocolate fudge, I made cinnamon chocolate fudge, as the cinnamon is a big nod to the flavors in the Biscoff spread. These came together so well. The dough is sticky so it’s a little hard to shape the cookies, but you just have to make a ball of some sort and plunk it in the mini muffin pan. The cups form on their own, so you don’t even have to make an indentation on the cups. My fudge took a while to come together, as I forgot to melt the chips first and it too forever for it to be smooth. It was worth the extra time stirring as these cookies are fantastic. Chocolate, cinnamon, fudgy, what more could you ask for?

Preheat oven to 325 degrees. You will need pans for 48 mini muffins. Spray the pans with cooking spray. (Bake the cookies in batches if you don’t have this many mini muffin pans.)

In a large mixer bowl, cream the butter, Biscoff spread and sugars. Mix in the egg and 1/2 teaspoon vanilla. In a small bowl combine the flour, baking soda and salt. With the mixer running on low, add the flour mixture to the butter mixture; stir until just combined.

Divide the dough in quarters and shape 12 dough balls out of each quarter of the dough. Place one ball in each compartment of the mini muffin pan.

Bake for 13-15 minutes, until lightly browned. If your cookies did not naturally shape into cups, make an indentation in the center of the cup while warm. Cool in the pan 5 minutes and then remove from the pan and place on a wire rack.

While the cookies are baking, make the fudge filling: in the top of a double boiler over simmering water, melt the cinnamon and chocolate chips. Stir in the sweetened condensed milk and 1 teaspoon vanilla. Stir until smooth. Using a small cookie scoop or spoon, fill each shell with the warm fudge mixture. Allow to set before serving.

Recipe adapted from All Recipes
Posted by Nicole at 6:00 AM

Nicole--perfect timing. I have everything in the pantry to make these. They look yummy. Thanks.