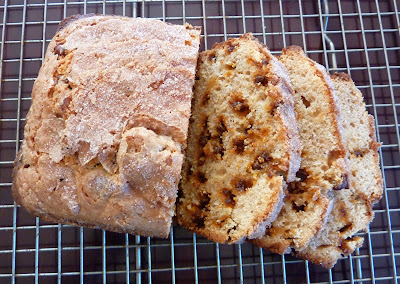 Whenever I see a new snickerdoodle recipe, I’m usually pretty quick to make it. I came across this snickerdoodle bread and it looked great. I always have cinnamon chips on hand, usually a couple of half full opened packages! This recipe initially made 5 mini loaves, but I halved the recipe and make one 9” x 5” loaf. These would be great to make as mini loaves and give as gifts, so if you have the mini pans, I encourage you to use them.

This bread comes together quickly. The batter seems on the dry side, but the cinnamon chips get kind of melty so the bread isn’t dry at all. I did forget to flour the pan, so I had a bit of a struggle getting the loaf to release from the pan cleanly. I eventually got it out, but make sure you don’t skip that step or you will be struggling like I did.

This doesn’t make a huge loaf, which is good for our household since I bake lots of different things. You could probably bake this in a 8” x 4” loaf pan if you wanted a taller loaf. The cinnamon chips and the cinnamon sugar topping impart a fantastic cinnamon flavor. I don’t know that it tastes that much like snickerdoodles (I think it would need some cream of tartar for that), but I still love cinnamon in anything.

In a small bowl, combine the flour, baking powder, salt and cinnamon. Set aside. In a large mixer bowl, cream the butter and sugar. Add the eggs, one at a time, beating well after each addition. Stir in the vanilla and sour cream. With the mixer running on low, add the flour mixture, and stir just until combined.

In a small bowl combine the cinnamon chips and 1 tablespoon flour. Stir the chips into the batter by hand. Spread the batter in the prepared pan. Sprinkle the top of the batter with the cinnamon sugar.

Bake for 50-60 minutes, until a toothpick inserted in the center of the loaf comes out clean. Remove from oven and let cool 10 minutes before removing from pan. Cool completely on a wire rack before slicing.

Recipe from Barbara Bakes
Posted by Nicole at 6:00 AM

So glad you enjoyed the bread. You loaf looks perfect. Did you know you can make baking powder by combining one teaspoon of baking soda with two teaspoons of cream of tartar? But maybe a stronger cream of tartar taste would be fun to try.