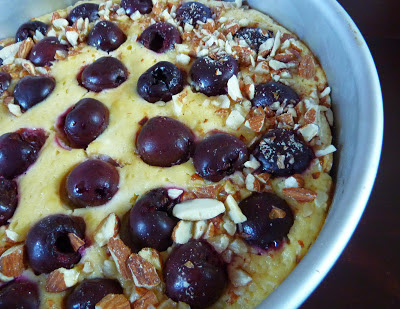 This tart is kind of like a thin cheesecake, but instead of using cream cheese you use plain yogurt. The recipe called for nonfat yogurt, but I used low fat instead. I figured that adding a little more fat to a baked good would probably be ok! I topped mine with cherries, since I had some of those left from my recent trip to the farmer’s markets. I used almonds as they pair wonderfully with cherries.

You were instructed to bake this tart in a cake or spring form pan, which I found to be unusual. I think it would have been fine in a tart pan and easier to assemble! I was unable to get my tart out of the pan and had to cut pieces while it was in the pan. I really liked the cherry/almond combination, but my cherries were big and next time I would cut them in half. This tastes a bit like a cheesecake, but not nearly as rich or heavy. I liked this and I would be game for trying it again with different fruit and nut combinations.

Recipe from Baking with Julia by Dorie Greenspan, page 378
Posted by Nicole at 6:00 AM

I like the look of the cherries in your tart. It makes me think of a clafoutis dessert.
I would make this again too.

I used cherries in mine, too...and a bit of almond extract. this is a make again for me, as well, with a little fiddling.

Your cherry tart looks great. I used blueberries. I think this may have more flavor if the fruit is stirred into the filling rather than being placed just on top.