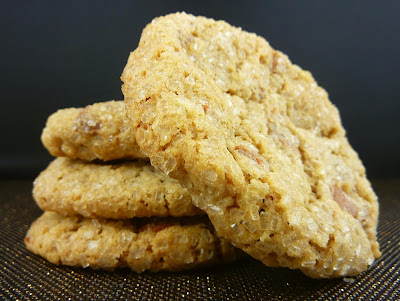 My work schedule is a lot different in the summer, so I find that sometimes I have cookies to bake and no one to take them to! I take baked goods to two main places during the summer because sometimes I am working in the library and sometimes I am working in the student services building. I had planned to take another treat earlier in the week and so I found baking on a Thursday but then having nowhere to take them. Than meant that I needed to find a cookie that made a smaller batch.

I came across this recipe, which makes about 2 dozen cookies. It uses cinnamon chips, which are a big favorite of mine. I always keep a couple of packages in the cupboard. Since I found this recipe kind of at the last minute, I was pleased that it used regular pantry ingredients. I didn’t have to go to the store, which is a bonus when it’s been a long day at work and you just want to go home and relax.

You grind the oats into flour, which is the only unusual component of this recipe. The original recipe said you could use butter for better flavor or shortening for a chewier cookie. I couldn’t decide so I used a little of both. I decided to omit the cinnamon glaze and just roll the cookies in sparking sugar crystals. These cookies are a nice combination of crunchy on the outside and chewy on the inside. The cinnamon flavor is really fantastic; I’m so glad I found this recipe!

In a food processor, grind the oats until it is a fine powder. In a medium bowl, whisk together the ground oats, flour, baking powder, baking soda, salt, and cinnamon. Set aside.

In a large mixer bowl, cream the butter, shortening, and sugar. Add the egg and vanilla and stir to combine. With the mixer running on low, add the flour mixture and stir just until combined. By hand, stir in the cinnamon chips.

Shape the dough into 2 inch balls and roll in cinnamon sugar or sugar crystals. Place on the prepared baking sheets, leaving at least two inches between each cookie.

Bake for 8-11 minutes, until the cookies look set. Allow to cool on the baking sheets for at least 5 minutes before removing to a wire rack to cool completely.

Recipe from The Monday Box
Posted by Nicole at 6:00 AM