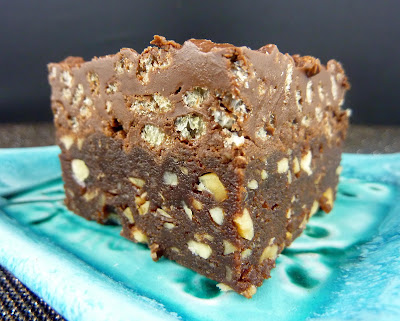 The other week, when my husband insisted on getting Cocoa Krispies at the store, I said that he’d have to find recipes that would use the remaining cereal. He sent me a couple of recipes and this was one that he found. This is a fantastic layered brownie, with a gooey brownie base topped with Nutella and crispy rice cereal. How could you go wrong? Anything with Nutella is so good!

I had planned to make these brownies a couple of different times, but I kept thinking that they would take a long time. I was pleasantly surprised that they came together, start to finish, in about 45 minutes. My only issue was that the chocolate chip/Nutella topping got a little too warm on the stove and I worried that it was going to scorch. I think next time I may try melting the topping ingredients in the microwave. I think my stove was just too hot.

These brownies were the easiest brownies in the world to cut. Lift them out of the pan, peel away the foil and with a few cuts of the knife they were all cut. Cutting them right when they came out of the refrigerator make a world of difference. I cut my brownies in fairly large pieces, and I think smaller bars may have been better. The fudgy brownie with decadent topping makes for a very rich bar. I little goes a long way!

Preheat the oven to 350 degrees.  Line a 9” x 13” pan with foil and spray with nonstick cooking spray.

In a medium bowl, combine the unsweetened chocolate and the butter. Microwave and then stir, in 30 second increments, until the mixture is smooth and melted. Transfer the mixture to a large mixing bowl and with a spatula, stir in the sugar.  Stir in the eggs and vanilla.  Mix in the flour and hazelnuts and stir to combine.  Spread the batter into the prepared pan.

Bake for about 30 to 40 minutes, until the edges are set, but the center is still slightly under baked.

Once the brownies come out of the oven, make the topping: in a medium saucepan combine the chocolate chips, Nutella, and butter.  Cook over low heat, stirring, until melted.  Remove from heat and stir in the cereal. Spread the mixture over the brownies. Refrigerate until firm.

Remove the bars from the pan by lifting out the foil; peel away the foil. Cut into bars or squares.

Recipe from Crustabakes, who got it from The Pastry Chef’s Baking