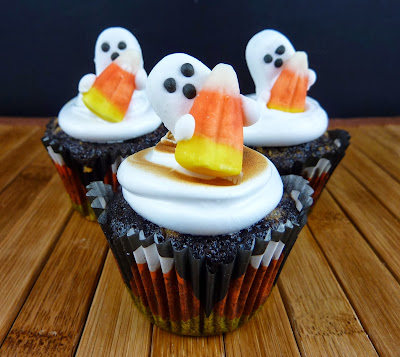 I was at the craft store earlier in the month and they had all of their Halloween baking supplies on sale. I seem to be a sucker for holiday themed cupcake liners. Of course if I need to bake cupcakes for a non-holiday, I’m usually out of luck. I saw these candy corn themed liners and I liked them, but I saw the little sugar ghosts holding candy corn and I couldn’t resist. I figured I would make some sort of cupcakes before Halloween, so I would be set.

I had some graham cracker crumbs left over, so I had recently looked for recipes that would use the crumbs. These cupcakes have a graham cracker base and topping, so they would be perfect. I made my cupcakes in the mini liners, so the ingredients listed here are for half a batch. I made 2 dozen mini cupcakes plus 5 regular sized cupcakes.

The batter for these cupcakes is so thin you may think you’ve done something wrong, but you haven’t. This recipe make the nicest cupcakes ever: not dry, great chocolate flavor, and they kept fresh for several days. The 4 egg whites make way more frosting than you need, but it’s hard to cut the recipe any more. I did use my handy kitchen torch to toast the marshmallow frosting but you have to be careful, as I did scorch a couple of my cupcake liners. Be careful when you are playing with fire!

Make the cupcakes: In a large mixer bowl, combine the sugar, flour, cocoa powder, baking powder, baking soda, and salt. Mix on low to ensure that the ingredients are combined. In a separate bowl, whisk together the egg, milk, oil, and vanilla. Add to the flour mixture and beat on medium until smooth. Add the boiling water and stir to combine. The batter will be very thin.

In a small bowl, combine the graham cracker crumbs, 2 tablespoons sugar and melted butter. Stir until the mixture comes together.

Bake the graham cracker base for 5 minutes, until golden. Fill the muffin cups ¾ full and sprinkle with some of the remaining graham cracker mixture.

Bake for 16-18 minutes, until firm and a toothpick inserted in the center of the cupcake comes out clean. Cool the cupcake in the pan for 15 minutes and then remove from the pan and cool completely on a wire rack.

Make the frosting: Place egg whites, sugar, and cream of tartar in a medium bowl. Set the bowl over a saucepan of simmering water (the water should not touch the bowl with the egg whites). Whisk the whites until the sugar is dissolved and whites are warm, 3 to 4 minutes.

Transfer the warmed egg whites to a large mixer bowl. Using the whisk attachment beat the mixture on low and gradually increase to high speed. Beat until stiff and glossy, 5-7 minutes. Add the vanilla and stir to combine. Using a pastry bag fitted with a large plain tip, pipe the frosting on the cooled cupcakes. Using a kitchen torch, brown the tops of the cupcakes.

Recipe from Culinary Serendipity
Posted by Nicole at 6:00 AM

I'm no baker, but I could be if I found the right cupcake liners!

These are so super cute!