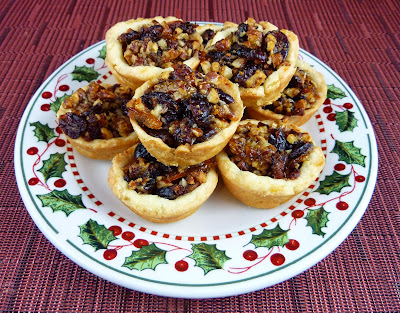 When I look for recipes, I get most of them online. We’ve moved most of our cookbooks downstairs, so they aren’t quite as close at hand as they used to be. Occasionally I grab a book to look at and take it upstairs. I found a Christmas cookie magazine that was published by Sunset probably 10 or so years ago. I looked through it and hoped I would find a different cookie to make. I came across these and immediately added them to my Christmas cookie list.

I love this type of cookies, baked in a mini muffin cup. I call them tassies, as the first cookie I made like these were Pecan Tassies. The original recipe used store bought sugar cookie dough for the shell, but I made a simple cream cheese pastry, which I have used before for other tassies. The dough is sticky but not too hard to work with. I recently bought a tart tamper and that made it even easier to press the dough into the pan. Just use floured fingers if you don’t have a tart tamper.

I really like the flavors in these tartlets. The crust has a little bit of tang because of the cream cheese and the filling is quite tart. If tartness is not a flavor you like, these cookies are probably not for you. They don’t have any added sugar, just what is in the marmalade, so they aren’t very sweet. Sometimes that’s a relief after all the super sweet treats that are around during the holidays.

Make the dough: in a large mixer bowl, beat the cream cheese and butter until smooth. With the mixer running on low, gradually blend in the flour and salt. Wrap the dough in plastic wrap and refrigerate for 30 minutes.

In a medium bowl, stir together the cranberries, pecans, marmalade, and vanilla. Remove the dough from the refrigerator. Divide the dough into 4 pieces and then divide each piece into 6 small pieces of dough. Place one piece of dough in each of the mini muffin cups. Press the dough into the bottom and ¾ of the way up the sides of the cup with floured hands. Fill each cup with about ½ tablespoon of filling.

Bake for 20-22 minutes, until the edges of the tartlets are light brown. Allow to cool for 20 minutes in the pan. Carefully remove the tartlets from the pan and cool completely on a wire rack.

Inspiration and filling recipe from Sunset Magazine, Dough recipe from Simply Sifted
Posted by Nicole at 6:00 AM