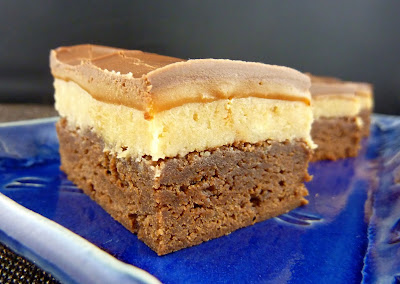 I have a lot of recipes saved and so many of them I never get around to making. My baking board on Pinterest is full of things that I was interested in baking, but then time gets away from me and I end up making items that I have recently pinned. This week when I was picking what cookie to bake, I planned two different recipes. Both were bar cookies, but in the end, I decided to bake these Twix brownies. Surprisingly, I had pinned this recipe quite some time ago and I didn’t forget about it.

Twix candy bars are very popular at work, so I figured that these brownies would be a hit. In writing up the recipe, I realize that there are a lot of ingredients in these bars! There are multiple steps to these bars, and I made them less stressful to make by making the brownies, shortbread layer, and caramel layer one day, and then I topped them with chocolate, cut them and photographed them the next. It’s important that you allow the layers to cool before moving on, so don’t rush this recipe.

Preheat oven to 350 degrees. Line a 9” x 13” baking pan with foil and spray the foil with non-stick spray.

Bake 25 to 28 minutes, until a knife inserted in the center of the brownies comes out clean. Allow the brownies to cool completely.

Make the shortbread layer: place the shortbread cookies in a food processor and crush into fine crumbs. Place crumbs in a large mixer bowl with the cream cheese and sugar. Beat on medium until combined. Press the shortbread into an even layer over the cooled brownies.

Make the caramel layer:  place caramel bits and milk in a microwave-safe bowl. Microwave in 30 second increments, stirring in between, until melted. Pour over shortbread layer and spread to make an even layer. Refrigerate the bars until the caramel is set.

Finish with the chocolate layer: place the chocolate chips and shortening in a microwave-safe bowl. Microwave in 30 second increments, stirring in between, until melted. Pour over caramel layer. Allow the chocolate to set before cutting into bars.

Recipe from Life in the Lofthouse
Posted by Nicole at 6:00 AM