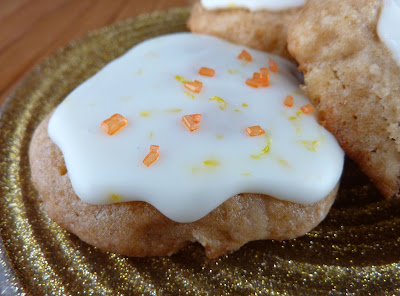 I do enjoy the marmalade, and it has just a touch of bitterness to it. As the jar was fair sized, my husband suggested that I make some cookies that use orange marmalade. That sounded great and I found a couple of recipes. Most were for bar cookies, which I think would be great, but I ended up baking these cookies because they aren’t a bar cookie. While traditionally made for fall, I thought these would work with a little adjustment to the spices. I took out the cloves and that left cinnamon. I used Chinese Five Spice, but cinnamon would also work.

Since I wasn’t taking these cookies to a large group of people, I decided to make a half recipe, which you see here. I edited the recipe and baked the cookies at 350 degrees. The original recipe called for a 300-degree oven, but I just don’t bake cookies at 300 degrees! The cookies are quite sticky and cakey once baked, but they are even better with the icing. I again simplified the icing and made a simple icing with powdered sugar and orange juice. While these cookies are good plain, but I think that they are the best with the icing. I sprinkled the top with some orange sanding sugar, but that was just to make them look fancy.

In a medium bowl, combine the flour, baking soda, salt, and cinnamon; set aside. In a large mixer bowl, beat the butter sugar, and vanilla, until creamy. Add the egg and stir to combine. Add the orange marmalade and mix on low until the marmalade is distributed evenly. With the mixer running on low, gradually add the flour mixture. When the dough comes together, wrap the dough in plastic wrap and refrigerate for about 2 hours.

Drop the dough by teaspoonfuls onto the prepared baking sheet, making mounds that are slightly larger than one inch.

Bake for about 10 minutes, until set. The cookies will be cakey. Allow the cookies to cool on the baking sheet for 10 minutes and then cool completely on a wire rack.

Recipe from Sprinkle Bakes
Posted by Nicole at 6:00 AM