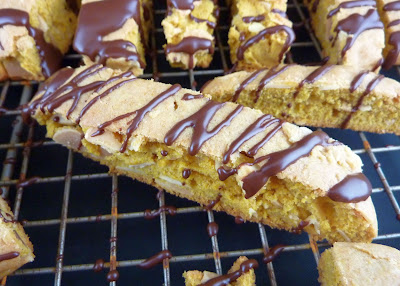 If you follow this blog at all, you probably know that I don’t like pumpkin very much. This time of year, pumpkin is everywhere, and I know that a lot of people like the flavor. In trying to rotate different types of recipes, I decided that this week I was going to make biscotti. I knew I hadn’t made pumpkin biscotti, and they couldn’t possibly be too soft, which is what I don’t like about pumpkin. As I have a friend at work that doesn’t eat dairy, I knew that these would be easy to translate into a dairy-free version, which is what I have here.

I was originally going to make a different recipe, but it was not well written. There was butter written into the recipe ingredients, but in reading the recipe it never said what to do with the butter. I found this one instead, which I like, but this recipe calls for individual spices rather than pumpkin pie spice. It’s probably for the best that I chose this recipe as I didn’t even have pumpkin pie spice! Most recipes also call for a white chocolate drizzle, but white chocolate is not dairy-free friendly, so I switched to a chocolate glaze. I always try to have dairy-free chocolate chips on hand.

This recipe follows the traditional biscotti format: make the dough, shape into logs, bake, slice, and bake again. This dough was so sticky, so I added additional flour, which is reflected in the recipe here. Even so, the dough was so sticky and seems to stick to everything. I eventually got the logs shaped, and after that it worked well. I should have baked the biscotti longer the first time, as my cookies are still on the soft side even after the second bake. That’s ok, I don’t like cookies to be too crunchy. I think these are even better with the chocolate drizzle, but I will leave it up to you to choose.

Heat the oven to 325 degrees. Line a baking sheet with a silicone baking mat.

In a large mixer bowl, combine the vegan butter, sugar, and brown sugar and mix on medium until combined. Add the eggs, pumpkin, and vanilla and mix on medium until smooth. With the mixer running on low, gradually add the flour, baking powder, salt, cinnamon, nutmeg, and ginger. Stir in the toasted almonds. The dough will be soft.

Divide the dough into halves; shape each half into a log, approximately 4” x 10”, and place on the prepared baking sheet.

Bake for 30-40 minutes, until lightly browned. Leave the oven on but allow the cookies to cool for at least 10 minutes.

Transfer the logs to a cookie sheet and slice into ¾” slices. Place back in the baking sheet, allowing the biscotti to sit on the bottom edge, as though the logs were together but slightly separated.

Bake for 15-20 additional minutes, until the cookies are dried. Allow to cool before adding the drizzle.

In a medium bowl, combine the chocolate and shortening. Microwave, stirring frequently, until the mixture is smooth. Drizzle over the cooled biscotti. Allow the chocolate to set before serving.
Recipe from Holly Jolly Holidays
Posted by Nicole at 6:00 AM