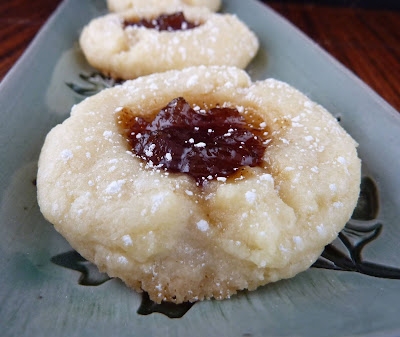 When my husband and I took our first trip to England, I had never had mincemeat. I’m kind of surprised about that now, as I love it so much! In England, Mince Pies are the standard, and you get them everywhere you go. I always make Mince Pies, but I wanted to know what else I could make with mincemeat. I made a variation and put mincemeat into pastry, but I thought that mincemeat would be perfect in a thumbprint cookie.

I searched online and there are several variations of thumbprint, most were classic thumbprint cookies with the suggestion that mincemeat would work for the filling. I found this Canadian recipe that specifically called for mincemeat and chose that one. It’s a very simple recipe and I already had mincemeat on hand, so these came together quickly. I always have mincemeat in my house!

This recipe makes about 2 dozen cookies, so not that many. Looking at the recipe, I was worried that they contained too much butter, and while baking there were a few cookies that spread along the edges. You could likely get away with using ¾ cup butter, and I might try that next time. This cookie requires no leavening, which felt strange, but you don’t want thumbprint cookies to spread. While they are very buttery, this is a great recipe to use up extra mincemeat.

In a large mixer bowl, combine the butter and sugar and beat on medium until pale. Add the vanilla and stir to combine. Add the flour and salt while the mixer is running on low. Mix just until the dough comes together.

Shape the dough into 1-1/4” balls and place on the prepared baking sheet. Make an indention in each cookie and fill with a small amount of mincemeat.

Bake for 12-14 minutes, until golden around the edges. Cool on the baking sheet for 5 minutes before removing to a wire rack to cool completely.

Recipe from CBC
Posted by Nicole at 6:00 AM