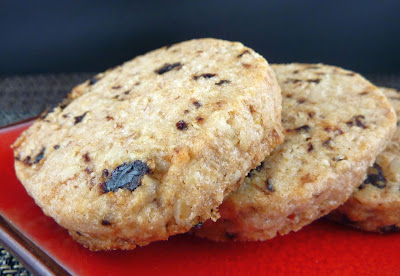 This week, I found a British recipe that was quite a bit different. We subscribe to a couple of British magazines and I find recipes and take photos on my iPad so I can keep track of them. I had found this recipe quite a while ago, and now it was finally the time to make them. When I read through the recipe, at first, I hadn’t realized that these were refrigerator cookies. I just looked at the yield and it said that it only made about a dozen cookies. I was appreciative that they were very easy to make since they are a refrigerator cookie.

The original recipe called for dried blueberries, and I find those to be gritty, but I figured that there would be any number of dried fruits that I could use. In the end, I used dried cherries, and they were wonderful. I think that the cherries had a good sweetness and made these cookies beautifully sweet. The original recipe called for porridge oats, which I am sure are different from the old-fashioned oats that I used, but there was no problem.

As a refrigerator cookie, these don’t really look anything like a traditional refrigerator cookie. You do want them to be very cold when you cut them, or they are too crumbly. I worried that the pecans and cherries would be difficult to cut, but there was no issue at all. I made about 18 cookies from this recipe, but that will vary depending on how you shape the dough. They are wonderfully sweet, and the cinnamon provides such a great flavor. These are a fabulous oat cookie, and the fruit adds so much!

Remove from the food processor, and shape into a log, about 4 inches wide and about 10 inches long. Wrap the dough in plastic wrap and refrigerate until firm, about 2 hours.

Remove the dough from the refrigerator and remove the plastic wrap. Slice the cookies into 1/3” slices and place on the prepared baking sheets.

Bake for 15-18 minutes, until set and lightly browned along the edges. Cool completely before serving.