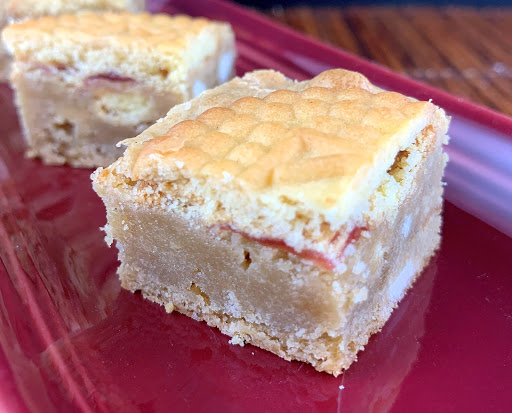 But the British store was out of them! My husband suggested that I use cookies filled with raspberry and custard cream, as they are quite similar. These were regular sized cookies, so I did a quick calculation to see that I needed about 125 grams. I used a little more than that, but this isn’t so precise. It does seem to make a lot of dough for the pan, but my pan is slightly smaller, so perhaps that is the issue. Mine is close but shallow, which likely didn’t help.

This is a simple blondie recipe (and I also have a variation with custard creams!) and it’s almost a cross between a cake and a blondie. Other than needed to measure to get the correct quantity of cookies, they are simple to make. Browning butter can be tricky, as it can burn so fast, but I didn’t brown mine all that much and they are still good. The sugars can almost be anything, as it calls for brown sugar and brown muscovado sugar. I had some muscovado sugar, but I found it later. I used light and dark brown sugar and it was fine. Muscovado sugar is more granular, and you could also use regular (caster) sugar. This recipe wasn’t picky, but the bars are still fabulous!

In a small saucepan, heat the butter on low until melted and begins to smell nutty. Add the light and dark brown sugar and half of the white chocolate and stir over the heat until everything is melted. Remove from the heat and allow to cool for 10 minutes.

Heat the oven to 375 degrees. Line a 20 x 30-centimeter (or similar) pan with foil and spray with nonstick cooking spray.

Transfer the butter/sugar mixture to a large mixing bowl. Add the eggs, one at a time, while beating the mixture on medium. Stir in the vanilla. With the mixer running on low, gradually add the flour and salt.

Bake for 25-20 minutes, until the bars pull away from the edge of the pan and a thin knife inserted in the bars comes out almost clean. Cool before cutting into bars.