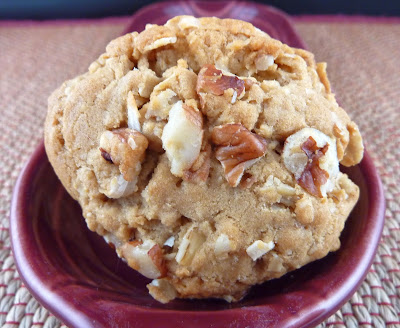 I really love fall baking and I think I am just going to transition to the flavors of fall no matter what the calendar says! Our weather has been much cooler, but that’s primarily due to the massive amounts of smoke that is polluting our air. I’m sure the sun wants to come out, but it is trapped behind all of the smoke. We’re doing what we can: closing the windows and not running any fans to move the air. It’s not hot but it’s stuffy and I am certainly looking forward to fresh air.

In preparation for fall baking I had planned a recipe to make and I was all set to go- and then I realized that I didn’t have enough maple syrup. I don’t get to the store very frequently and I suppose I could have run out and got some maple syrup, but I chose to find a different recipe. This recipe called for the same flavors, maple and pecan, so I thought I would give it a try. This recipe also called for oats and coconut, which I like very much. It’s not a bar cookie like the original plan, but that’s ok.

Like other recipes I have made, this one calls for browned butter. While browned butter isn’t difficult, it takes just a second to go from browned to burnt so watch that carefully. In making this dough, it is fairly crumbly, although it was fine to shape into cookies. I would perhaps add an egg, just to help the dough come together. This recipe doesn’t call for eggs, which is slightly unusual, so adding one would be ok. It’s amazing how an egg or egg yolk can improve the dough. While I ended up making these as I had the ingredients, they are FANTASTIC! They are super crunchy with pieces of pecan, oats, and coconut. I will certainly make them again!

In a medium bowl, whisk together the oats, flour, coconut, brown sugar, salt, and cinnamon; set aside.

Place the butter in a small saucepan over low heat. Cook on low until the butter melts and begins to brown. Once golden brown, remove the butter from the heat and transfer the browned butter to a large mixer bowl. Add the maple syrup to the mixer bowl and mix on medium to combine. Dissolve the baking soda in the boiling water and then stir it into the butter mixture. The mixture may become slightly foamy; add the vanilla and stir on medium to incorporate.

With the mixer running on low, gradually add the oat/flour mixture, beating until the mixture almost comes together. Add the toasted pecans and stir on low to incorporate. The dough may be slightly crumbly but will shape into cookies with no issue.

Shape the dough into 2 tablespoon rounds and place on the prepared baking sheets. Flatten the cookies slightly with the palm of your hand.

Bake for 12-14 minutes, until lightly golden. Do not over bake or the cookies will be dry. Allow the cookies to cool on the baking sheet for 10 minutes before removing to a wire rack to cool completely.