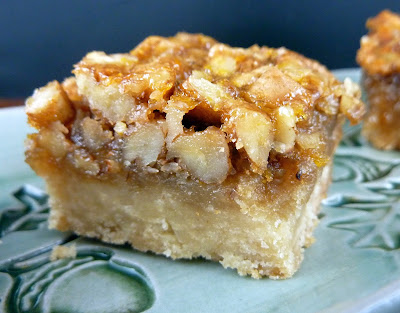 It’s almost time for Christmas cookies, but here’s one more recipe for the Christmas posts come in earnest next week. I had pinned this recipe a while ago, as maple and brown sugar are classic fall flavors. I was going to make them, but then I didn’t have enough maple syrup. I replaced that and then I was waiting for our annual shipment of pecans that we order from Georgia. They are fresh from the farm and can’t be beat! I waited a little and finally had all of the right ingredients.

The original recipe called for walnuts, but I much prefer pecans so that’s what I used in this recipe. I feel that the two can be interchanged with little difficulty. This may seem like a lot of ingredients for an 8” square pan, but it works out. There is a shortbread crust topped with a maple/pecan pie topping. I’ve gotten so used to cutting recipes in half that it seemed like it such a big recipe, but in the end it wasn’t.

These come together very easily, and my house smelled divine while they were baking. I think in the future I would use a larger piece of foil to line the pan. A little bit of the maple syrup mixture got behind the foil and that was sticky and made it a challenge to get the bars out of the pan. Thankfully, my pan has a separate bottom, which helped tremendously. The bars are a little sticky when you cut them, but they taste like little maple pecan pies!


Heat the oven to 350 degrees. Line an 8” square baking pan with foil and spray the foil with nonstick spray.

In a large mixer bowl, beat the butter and brown sugar on medium until light. Add the flour and salt and mix on low until the dough comes together. Press the dough into the prepared baking pan.

Bake for 20 minutes. Remove the pan from the oven and set aside while you prepare the filling. (Leave the oven on.)

In a large mixer bowl, combine the maple syrup, brown sugar, bourbon, eggs, vanilla extract, and salt. Stir on low to combine. Add the chopped pecans and stir to incorporate. Pour the filling over the warm crust.

Bake for about 35 minutes, until golden. Allow the bars to cool for 10 minutes. Run a knife around the edge of the pan to help loosen the bars, and then place on a wire rack to cool completely. Once cool, remove from the pan, remove the foil, and cut into bars.