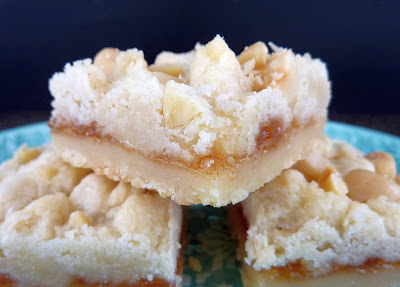 When I originally came across this recipe, it looked a lot different. I actually have made the salted caramel butter bars that are the origin of the recipe I found, and the variation I found used Nutella. I pinned this, but I figured that I would make a change somehow. My first thought was to try a type of fancy peanut butter, something like a cinnamon peanut butter or something. I then realized that this recipe would also work with jam or preserves, so I planned to make it this month with all my other jam recipes.

I went to the store to look at the offerings, and in the end my husband found the preserves that I ended up using. We were by the cheese counter and found a jar of pear hazelnut fruit pâté. I’m not really sure how they define their concoction, but it’s most similar to thick preserves. I knew it would work, and I decided that adding some chopped hazelnuts to the top would be wonderful. I also halved the original recipe which used an entire pound of butter! (This is not health food!)

This dough is simple and comes together quickly. I think it took less time to make the dough than it took to heat the oven. You use about a third for the crust and 2/3 for the topping, but even if you divide the dough in halves, it will work. Don’t stress too much about it. I do wish that I had a little more pear hazelnut preserves, but I had just enough. The only challenge with these bars is that they don’t really brown, so it is hard to tell when they are baked through. I waited until the hazelnuts looked toasted and called it good. These bars are so good with the fruit and hazelnuts. I wouldn’t say that the pear is a distinct flavor, but the fruity flavor in these bars is wonderful.

Heat the oven to 325 degrees. Line an 8” square pan with foil and spray the foil with nonstick cooking spray.

In a large mixer bowl, beat the butter, sugar, and powdered sugar on medium until light. Stir in the vanilla. With the mixer running on low, gradually add the flour, stirring just until the dough comes together. Wrap 2/3 of the dough in plastic wrap and refrigerate while you bake the base of the bars. Press the remaining 1/3 of the dough into the bottom of the prepared pan.

Bake for about 14 minutes, until the crust is set. The base will not be browned. Allow the crust to cool on a wire rack for 15 minutes before proceeding. Leave the oven on.

Spread the pear hazelnut preserves onto the partially baked and cooled base. Remove the remaining dough from the refrigerator and crumble the dough on top of the preserves. Top the crumbled dough with the chopped hazelnuts.

Bake for an additional 25-35 minutes, until the hazelnuts are golden, and the topping is set. Allow to cool completely before cutting into bars.