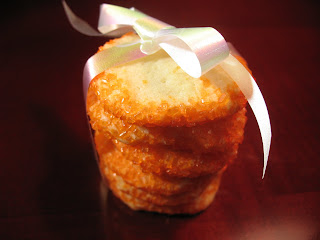 Ulrike of Küchenlatein chose Grandma’s All Occasion Sugar Cookies for this week’s Tuesdays with Dorie selection. I don’t always make sugar cookies at Christmas: that’s my Dad’s job! I do have a favorite recipe that I like so I thought it would be interesting to give these a try and see how they are different.

Dorie gives you lots of variations, so I ended up trying two things with the dough: I added orange zest to the dough and then divided the dough into two halves. One half I just chilled to be rolled out and the other half I formed into a log and rolled in orange sanding sugar. I knew that they’d be super quick as refrigerator cookies, just slice and bake. 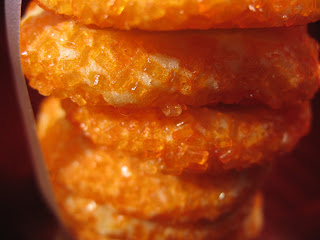 I refrigerated the log about 5 or 6 hours until it was firm and then sliced it into ¼ inch slices. Even though these weren’t perfectly round when I put them in the oven (Dorie calls this “rustic”), they puffed a little while baking and came out of the oven looking almost perfect. I originally was going to glaze them with a powdered sugar/orange juice glaze, but my husband said that they didn’t need anything more.

The other half of the dough I was going to use for cut outs, but I had bought a Christmas cookie sheet earlier this year with indentations; you just press the dough into the openings and bake and then you get nicely formed cookies without so much work. I pressed the remaining dough into the pan and baked them until lightly golden. 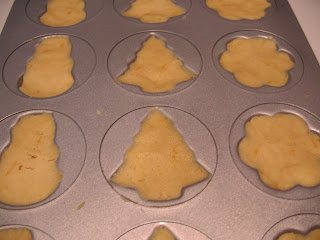 This turned out fairly well, but I think that the dough needed to be a lot thinner than it was. They are soft and have good flavor. I was going to decorate them with some frosting in a bottle that I had picked up recently, but it was too late in the evening to fiddle with that. They don’t look too bad just by themselves.

Since I added orange zest to the dough, it’s pretty hard to compare these to the sugar cookies that I usually make. I think the ones I make are a little crisper, but then again I roll them a lot thinner than these. I really like the refrigerator cookie option. I might try that variation again with some other flavors! 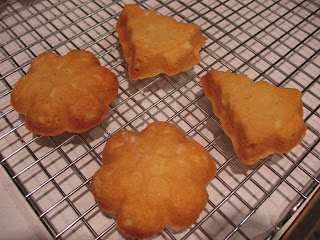 Recipe from Baking from My Home to Yours by Dorie Greenspan, p. 146

Wow, I've never seen a pan like that. Cool! I'm thinking you probably got some tasty edges out of that sucka.

I added orange zest too.

I have to say, that's a mighty nice picure on top! It looks like a vintage 50's pic, with golden lighting and rustic colors!
Beautiful, Nicole, just as the cookies!

your cookies look great! love the little bow in the top pic :) i've never seen a pan like that before, looks cool!

Sorry, I got sidetracked. Your cookies look and sound scrumptious! Glad you liked them!

What a fabulous pan! Perfect for someone like me who has no patience for rolling out dough and cutting the cookies out.