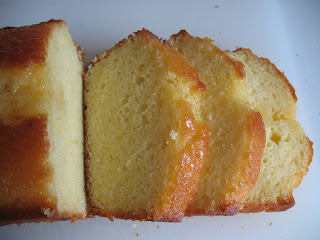 Liliana of My Cookbook Addiction selected this week’s Tuesdays with Dorie recipe. She selected the French Yogurt Cake with Marmalade Glaze. This is very similar to a pound cake, baked in a loaf pan and then topped with a glaze of strained lemon marmalade. I was unable to find lemon marmalade at the store, so I used apricot pineapple marmalade. The recipe also gave the option of using ground almonds for part of the flour. I didn’t use the ground almonds. My food processor was dirty and in the wash.

This was a very simple cake, one that you mix by hand in a single bowl. I really appreciated this as I often have lots of dishes to wash after I bake and there was just the one bowl! I’ve made many pound cakes before, but this was a little more scaled back and included yogurt. I used full fat plain yogurt. I picked this up at the store before I had completely read the recipe, so I bought a big container. When I got home I realized that I only needed ½ cup of yogurt, so I have a lot left. Any ideas about what I can make with the rest of the yogurt?

I have to say that I’ve never had very good luck with baking things in a loaf pan. I can never seem to get things cooked all the way through. I hoped that my luck would be different this time! The loaf baked nicely, although I did cook it 2 minutes longer than the recipe recommended. I wanted to make sure it was done. It had a lovely crack along the top, which I think is pretty typical of baked loaves. Mine stuck just a bit in the corners of the pan. I thought I had buttered the pan enough, as I knew some other Tuesdays with Dorie bakers had struggled with this, but I guess I missed the corners. 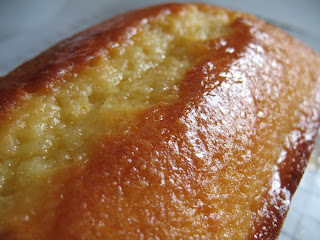 This cake is wonderful. It sliced beautifully. It has a very firm texture, but it isn’t dry or anything like that. The glaze gives it a nice bit of sweetness, but it’s not too sweet. I liked the apricot pineapple glaze; it was very refreshing. I think that this cake would work as the base for almost anything. I think I would like to try it with some fruit and whipped cream. Some other Tuesdays with Dorie participants were going to try this with some lemon curd, which I think would be excellent! Check out what some of the other bloggers made by visiting the Tuesdays with Dorie site .

Recipe from Baking from My Home to Yours by Dorie Greenspan, page 224

Your cake is perfection!

WOW! Can your cake BE any more gorgeous!?

Your cake looks beautiful! To help with sticky corners, I usually go over the buttered pan with a paper towel, just making sure the coverage is even. It's hard to get into those corners with a stick of butter!

Oh! That looks so moist and delicious. And the glaze on top is perfect.

Hey, great minds think alike. I too used apricot pineapple! Your cake looks scrumptious.
For leftover yogurt, I add sweetened cereal or fruit and eat it up. I also add a little bit of chili powder or salsa and use it as a dip. Taste just like sour cream. If you top it on your baked potato, then it also tastes like sour cream!

What a beautiful cake!

Your cake is picture perfect! The apricot marmalade sounds like a great substitution.

I always have plain yogurt in my fridge. I like to have it for breakfast with granola mixed in or red grapes and slivered almonds. It's so good. Or, make some more cakes and freeze them.

My husband stirs a little bit of jam into plain yogurt and has it for a snack.

Or you can make more yogurt cakes -- this cake freezes well!