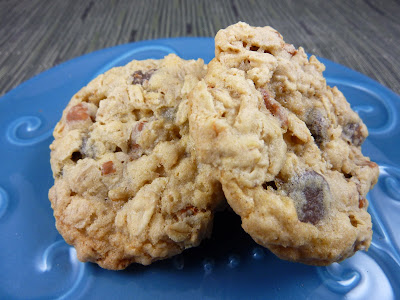 After the flurry of holiday baking and other sweet treats, I’ve been in the mood for something a little simpler this week. I was thinking of making oatmeal cookies, or something really homey. It’s been a busy week at work and I’ve been fairly tired, so I didn’t want to mess with anything too complicated.

I had brought one of my cookie magazines to work with me and I pick a couple of potential contenders to bake, but when I got home my husband had found a recipe that sounded really great. For Christmas I had received The Grand Central Baking Book and the recipe was in there. It was nice to try out my new book, and nice to make something from a local establishment. My friend at work had brought this in to work and I had immediately added it to my Christmas list. I’m glad I got it!

While this is a standard oatmeal cookie recipe, I couldn’t resist the urge to make these a little bit special. The recipe calls for milk and bittersweet chips, but I wanted to use cinnamon chips. I used semi-sweet chips and cinnamon chips and it’s a great flavor combination. I’m so glad I made that substitution. The original recipe says to use 1.5 ounces of dough per cookie. I weighed one out and that would have been one huge cookie! I made them smaller, about half the size. As a result, this recipe made over 6 dozen cookies. If you want to make “normal” sized cookies, you may want to cut this recipe in half.

In a large bowl, combine flour, baking soda, baking powder and salt. Set aside. In a large mixer bowl, combine butter, sugar and brown sugar. Beat on medium speed for 3-5 minutes, until light and fluffy. Crack the eggs into a small bowl and add the vanilla. While the mixer is running, add one egg and beat until incorporated. Add the second egg and mix to combine.

Gradually add the dry ingredients to the butter mixture. In the same bowl used for the flour mixture, combine the oats, chocolate chips and cinnamon chips. With the mixer on low, gradually add the oat mixture. You may need to finish mixing by hand with a sturdy spatula.

Drop the dough by cookie scoop and shape into rounds; flatten to about ½” thick with your hands. Bake for 10 minutes; cookies should be golden brown on the edges and may look slightly undercooked in the center. Allow to cool on the baking sheet before removing to a wire rack.

Recipe from The Grand Central Baking Book
Posted by Nicole at 6:00 AM

Yum! Love the cinnamon chips...now if only I could find them when I want them at the store. ;)

These are truly perfect for my grandparents snacks everyday. Not so sweet and it has their favorite Cinnamon flavor.Thanks for the recipe.

Cinammon for oatmeal cookies? I never used of that but I want to give it a try. Thanks for sharing this one.

Thanks for posting this recipe! Had been looking for one incorporating both cinnamon chips and chocolate chips. These taste soooo good, especially right out of the oven! :)