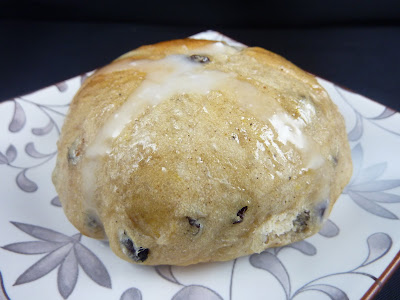 I had never made Hot Cross Buns and this Easter I decided that it was finally time to give them a try. I’ve had store bought ones before, but I hadn’t had those all that often. My husband was very happy that I wanted to make them, since they are a traditionally British Easter treat. Wanting to be authentic, I looked at the British cookbooks we have at home and on British websites. I decided to make this recipe from the BBC Food website, which often has some pretty tasty looking things.

The measurements here are in weights, since I often have to do some calculating when I use British recipes. The original recipe called for “strong” flour, which I am assuming means bread flour. I didn’t have any so I just used all-purpose flour. It also called for golden syrup where I used honey. I swear we had golden syrup but I couldn’t find it in the cupboard. Oh well.

These do take a while to put together, but none of the steps are very difficult. For me, the hardest part was kneading in the dried fruit, as every time in kneaded the dough, pieces of dried fruit would try to go flying across the counter! These don’t have a frosting cross, which is what I am used to seeing in the American grocery stores. You pipe a cross with a flour paste, but that didn’t make much of a cross on mine. Also, these were huge! I think I prefer them a little smaller but the flavor was good. I loved the mix of dried fruits and the spice. I was glad to try these but I think I will experiment with different recipes next Easter.

In a large mixing bowl, combine the flour, salt and allspice, then rub in the butter using your fingertips. Make a well in the mixture and add the sugar, lemon zest and yeast. Beat the egg and combine it with the warm milk and then add to the flour mixture. Mix together to form a soft dough.

Turn out the dough onto a lightly floured work surface. Carefully work the mixed dried fruit into the dough until well combined. Knead lightly for 5 minutes, or until smooth and elastic.

Grease a large, warm mixing bowl. Shape the dough into a ball and place it into the prepared bowl. Cover with a clean towel and set aside in a warm place for one hour to rise.

Turn out the dough onto a lightly floured work surface and knock back the dough. Shape it into a ball and return it to the bowl, covering with a towel. Let rise for an additional 30 minutes.

Turn out the dough onto a lightly floured work surface and divide it into 12 equal pieces. Roll each piece into a ball and flatten slightly into a bun shape using the palms of your hands. Cover the buns again with a towel and set aside to rest for 5-10 minutes.

Preheat the oven to 475 degrees. In a small bowl combine the flour and the water to form a paste. Once the buns have risen, spoon the flour mixture into a piping bag and pipe a cross on each bun. Bake for 8-12 minutes, or until pale golden-brown. As soon as you remove the buns from the oven, brush them with the honey, and set aside to cool on a wire rack.

Recipe from BBC Food
Posted by Nicole at 6:00 AM