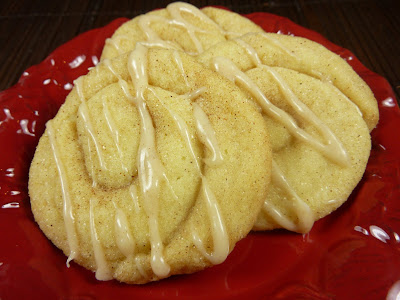 As my search for (non-imitation) maple extract was a failure this week, I decided to make these fun little cookies. Who couldn’t love a cookie that looks like a cinnamon roll? I have seen other cookies that resemble cinnamon rolls, but they are often a slice and bake cookie. These are shaped quite differently, where you roll the dough into ropes and then make little spirals.

Looking at the dough for these, you could actually call these an alternatively-shaped snickerdoodle. And I love snickerdoodles so that’s ok in my book! The dough contains cream of tartar, which I think gives snickerdoodles their distinctive taste. Here the spirals have the cinnamon sugar woven throughout the cookie. You’re also supposed to sprinkle the shaped cookies with cinnamon sugar before baking, but I forgot to read that step so I didn’t do it.

The original recipe called for white chocolate glaze, but I wanted to make these more authentically cinnamon roll-like and opted for a cream cheese glaze. This was a bit dicey as I only had a scant ½ cup of powdered sugar in the cupboard but I just made it. I also added a little cinnamon to the glaze. These cookies puff up beautifully and just look great. They smell just like snickerdoodles but are a little closer to a thin sugar cookie in texture. The cream cheese in the glaze gives them a slightly different flavor than snickerdoodles, but they are excellent!

In a large mixer bowl, cream the butter and sugar until light and fluffy. Add the egg yolks, honey and vanilla and stir until combined. In a small bowl combine the flour, baking powder, salt, and cream of tartar. Gradually add the flour mixture to the mixer bowl and stir until the flour is completely incorporated. You may need to mix the last bit by hand.

Shape a tablespoonful of dough into a 6-inch long rope. Roll the rope in the cinnamon sugar. Loosely coil the rope into a spiral shape and place on the prepared baking sheet. Bake for 8-10 minutes or until the cookies are set. (They don’t brown that much.) Allow to cool on a wire rack before glazing the cookies.

Combine the cream cheese, powdered sugar, butter, vanilla and cinnamon to a small bowl. Beat until smooth. Add milk as required until the glaze is thin enough to drizzle. Drizzle the glaze over the cooled cookies. Allow to set.

Cookie recipe from Taste of Home. Glaze recipe adapted from Epicurious.
Posted by Nicole at 6:00 AM

These look ABSOLUTELY delicious! I really like the idea of the cream cheese drizzle, just to add another layer of taste to the cookies. Yum!

Yes, I agree on the idea for cream cheese, it brings twist on the taste instead of using chocolate drizzle. Is it possible if you mix food color on the cream cheese so that it will look more attractive like color red =)