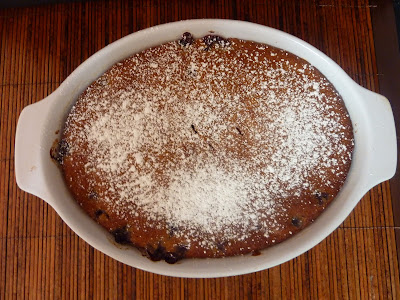 This week’s Tuesdays with Dorie recipe was chosen by Cindy of Everyday Insanity. She chose the Blueberry-Brown Sugar Plain Cake, which I guess I would describe as a blueberry coffee cake. You can get the recipe for this cake on Cindy’s blog and make sure you check out the Tuesdays with Dorie site to see how others interpreted this recipe. Since blueberries may or may not be in season for people from around the country (and the world), I’m sure there were some variations using different fruit.

I think calling it a “plain” cake is a bit unfair, because it didn’t seem plain when I was eating it. But I guess that it is fairly simple with no nuts or streusel or icing. The method for making the cake was a little different, in that you beat the egg whites, then make a butter cake recipe and then fold on the egg whites. I messed up my egg whites a bit but they still worked. I had some lovely fresh blueberries to use too, so I was excited for this. The house I lived in the first 6 years of my life had lots of blueberry bushes in the back, so I’ve loved blueberries for the longest time. (I didn’t like that there were spiders in the bushes, but that’s another story.)

I didn’t have a 7” x 11” pan, so I used an oval baking dish that was roughly the same size. I watched the baking time but it baked for the recommended amount of time. After serving the cake, I think I would have baked it just a touch longer, but it tested done. With the brown sugar batter, it was difficult to use the color of the cake to see how done it was. All of my blueberries sank to the bottom of the cake, so next time I will toss them with some flour. I really liked this cake. Mine was super moist and warm when I served it and the brown sugar cake was so very good. This cake was perhaps unadorned but it was a really great way to showcase blueberries.

Recipe from Baking from My Home to Yours by Dorie Greenspan, page 36
Posted by Nicole at 6:00 AM

Your cake looks great! I like that oval dish.

So pretty with the powdered sugar on top... I remembered it AFTER I took my photos! :)

My berries ended up at the bottom of the cake too. No worries, it was still delicious! Thanks for taking the time to bake along with me this week. Have a great day,

seems like a successful cake, I can't wait to make it too!

I love the idea of baking this in a nice baking dish - makes it a little less "plain." Your cake looks lovely.

yours looks so cute in that baking dish!

I like the word simple better than plain. Your oval-shaped cake looks wonderful! How neat that you had blueberry bushes in your yard!

I am so jealous that you had blueberries behind your house growing up....so cool.

i like the dish you baked it in. looks suddenly elevated in elegance.

looks great! unfortunately tossing the blueberries in flour doesn't work... I wonder if dorie's turns out like this too?

Looks great! I didn't think plain applied to it either. It's too good!

It seems like everyone's fruit sank, but they all tasted great. I like the oval dish--very homey, but definitely not plain!