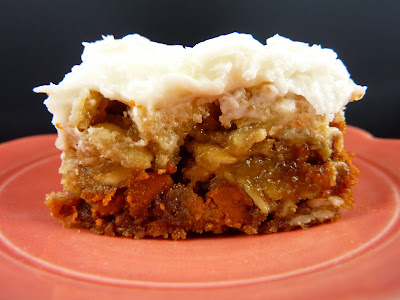 I’ve been waiting to make these bars for a while! Fall has arrived these are the perfect bars for fall. Apple, cinnamon, and oats are a great combination. I love cinnamon baking chips and I stock up at the one grocery store in my area that stocks them. This recipe calls for the chips and as soon as I saw that in the recipe I set it aside and said: “I’ll make these in the fall.”

If you can’t find cinnamon chips, the original recipe suggests using the same amount of white chocolate chips and a teaspoon of cinnamon. I don’t think that would be quite the same, but I’m sure that combination would be good, too.

I messed up when making these and only put in ½ cup of butter in the cookies. I hoped with the cinnamon chips and the apple they would be ok, and they seemed to be fine. The frosting was too thick to spread so I added about a teaspoon of milk to make it easier to work with. They were a little tricky to cut, so you won’t get perfect looking squares, but that’s ok! (I admit, yes, I freak out about them not looking perfect, but it’s ok.) The flavors in these are superb!

In a small bowl, combine the flour, salt, baking soda, and oats. In a large mixer bowl, add the butter, brown sugar, and sugar. Beat on medium until creamy. Stir in the eggs and vanilla, until combined. Reduce mixer speed to low and stir in the flour mixture. By hand, stir in the cinnamon baking chips and chopped apple.

Spread the dough into the prepared pan. Bake for 33-38 minutes, until a toothpick inserted in the center comes out clean. Cool completely before frosting.

Make the frosting: in a large mixer bowl, combine the powdered sugar, butter, cream cheese, and vanilla. Beat until smooth. If the frosting is too thick, add milk until the frosting is the desired consistency. Frost the cooled cookies and then cut into bars.

Recipe from Land O’ Lakes
Posted by Nicole at 6:00 AM

These look delicious, I am ready to cook with apples! I have yet to cook with cinnamon chips. Hopefully I can find them. Have a great weekend.

I haven't looked for cinnamon chips yet this year, but the hunt may be on after seeing these bars. They look so good!

I have not found cinnamon chips either. I think KAF might have some. I have caramel chips though and they are great in anything.