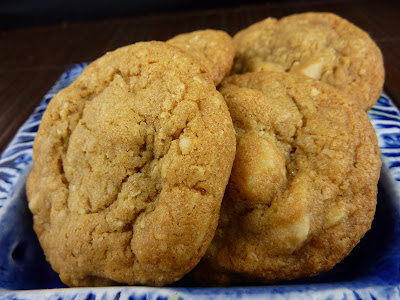 Moving away from Christmas cookies, but I think this cookie with the combination of ginger and macadamia nuts would certainly fit as a holiday cookie. It’s not super sweet, but I think that’s ok after all of the sweets that you’ve probably eaten recently.

This recipe comes from a British cookbook, via the Guardian newspaper. I probably saw them somewhere else on a blog I follow, but I can’t remember! As this is a British recipe, the measurements are in grams so I have converted the weights here. The original recipe called for 3 knobs of candied ginger and I’m not exactly sure how big a knob is! I think I used about ¼ cup and it worked out. I used a Jamie Oliver recipe for Christmas dinner and it had similar measurements. I’m a bit of a control freak but I just have to trust that I know enough about being in the kitchen to make it work.

These cookies are quick to put together, but they taste better a day or so after you bake them. The ginger becomes more pronounced once the cookies have time to sit. They have a nice crunch and the buttery flavor of the macadamias adds a lot. These are really amazing, so hopefully you aren’t cookied-out and will give them a try!

In a large mixer bowl, beat the butter and brown sugar until smooth and light, and then stir in the egg. Add the candied ginger and coconut and stir until combined. In a small bowl combine the flour, ginger, allspice and baking soda. Add the flour mixture to the butter mixture and stir on low just until incorporated. Stir in the macadamia nuts.

Shape the dough into 1 inch balls and place on the prepared baking sheets. Bake for 15 minutes, until golden brown. Cool on the baking sheet for 5 minutes before removing to a wire rack to cool completely.

Recipe from Dan Lepard, via The Guardian
Posted by Nicole at 6:00 AM