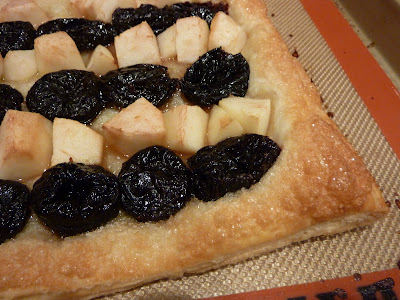 The first of this week’s Tuesdays with Dorie recipes was selected by Julie of Someone’s in the Kitchen. She chose Puffed Double Plum Tart. The tart uses fresh plums and prunes, but of course fresh plums are nowhere to be found this time of year so my tart is a pear and prune tart. The other Tuesdays with Dorie recipe for this week, which I didn’t have time to make, was picked by Laurie of Slush. She chose the Unbelievably Good Chocolate Blueberry Ice Cream, which sounds interesting, doesn’t it? You can get the ice cream recipe on Laurie’s blog and the tart recipe on Julie’s blog.

This tart uses a puff pastry base and then is topped by prunes that have been steeped in red wine and orange zest and the fresh fruit. I love prunes and soaking them in wine makes them even better! I used port for the red wine as that is the standard red wine we use in our household (powerful stuff!). The house smelled so good when the red wine mixture was boiling away. I was supposed to reduce the wine mixture and make syrup, but I boiled mine too long and it became molasses. So I didn’t brush the fruit with the extra syrup, but it worked out ok anyway.

This came out of the oven puffed and beautiful. I don’t always have the best luck with puff pastry, but I had no problems at all. It was beautiful with the dark rows of prunes and the light row of pears. This is fairly simple, but it’s really a lovely little tart. I like the combination with the pears, but I like plums a lot so I would be up for trying this again once plums are in season. This was a great choice, and we’ve only got one new recipe left for Tuesdays with Dorie. I’m so sad that we’re done with the book, but it’s such an accomplishment, too.

Recipe from Baking from My Home to Yours by Dorie Greenspan, page 378
Posted by Nicole at 6:00 AM

That looks fabulous. My puff pastry did not puff. I think I'm going to have to try this one again.

Beautiful, Nicole - I love pears, but never thought to use them in this one. Next time! :)

Ciao Nicole ! Beautiful tarte ! I used apples but I'm sure pears were great !