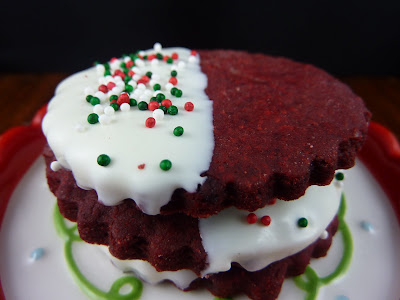 12 Days of Cookies Day 9: Red Velvet Shortbread Cookies. Sometimes, cookies aren’t really Christmas-y at all with the exception of the color. Red Velvet cookies aren’t spicy or gingery or have cranberries or any of those other traditional flavors of the holidays. But man, they are so red and look so festive! I thought that these would be a fun addition to the selection of cookies this year and I was right. They are so fun and they just look great.

You make the dough in the food processor, which I’m becoming a big fan of doing. It just seems like it streamlines the making of the dough so much. Plus, with all of the food coloring you’re at risk of getting it all over your kitchen. I used gel food color, which provides very intense color. Mine was a little dried and I think I may have used more than 1 tablespoon; it was really hard to measure. My dough was pretty crumbly, which is not atypical of shortbread dough, but I was a little worried. The color looks browner than red before they are baked, but they became a beautiful red color once baked.

The cookies by themselves, without the white chocolate, are simple. They have a slight cocoa flavor but that’s about all. The white chocolate really adds a lot, so don’t skip that step. I again tried using a couple of different types of sprinkles, but these Christmas sprinkles looked the best. I really liked these cookies, but I’m not going to kid you, my kitchen was quite a mess after making them. Red food coloring gets everywhere! When I was doing the dishes after making these I thought my hands were bleeding because of the food coloring. Good to know that red gel food coloring could be used as fake blood in a theatrical production!

In a food processor, combine flour, sugar, cocoa powder, and salt. Cover and pulse until combined. Add butter and red food coloring. Process with on/off turns until mixture resembles fine crumbs. Then continue to process until mixture begins to clump together.

Place the dough in a lightly floured surface and knead lightly until nearly smooth. Roll the dough to a 1/4-inch thickness. Using a floured 1-1/2-inch round cutter, cut out dough. Place cutouts 1 inch apart on the prepared baking sheets. Press scraps together and reroll.

Bake for about 15 minutes or until centers are set. Transfer cookies to a wire rack; let cool.

In the top of a double boiler or in the microwave, melt white chocolate and shortening. Dip half of each cookie into melted chocolate. Sprinkle with sprinkles, nonpareils or colored sugar. Let stand on waxed paper until set.

Recipe from Recipe Girl
Posted by Nicole at 6:00 AM

Wow! These look amazing! That red is stunning!