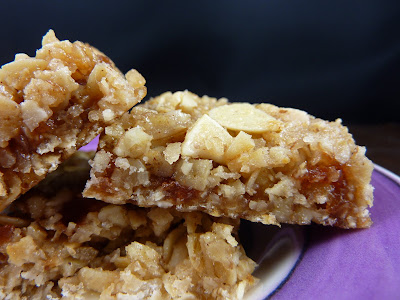 I’ve always wanted to make granola or granola bars, and now I can say that I have! I eat a lot of granola on a daily basis and I just don’t know why I haven’t made it before. I guess I’m pretty picky about granola and when you make it yourself it makes a pretty big batch. I’d hate to be stuck with a big batch of granola that I didn’t want to eat.

I had bought these Jammy Bits from King Arthur Flour a while back and I still had half a package sitting in the cupboard. I’m trying to clean things out after the marathon of Christmas baking so I wandered over to the King Arthur Flour site to see what ideas I could find. They linked to this recipe for granola bars and they seemed like a winner. I could use up the jammy bits and I’d get a chance to try making granola.

This recipe calls for sticky bun sugar, which I didn’t have, but the King Arthur website gave a substitution, which is what I have written into the recipe. For the nuts/coconut, you can use any combination. I used the combination they suggested, but I might try this with hazelnuts and even chocolate chips. I lined my pan with foil and I would suggest not doing that as it was hard to remove from the sticky bars. Cut them while they are warm or you won’t have a chance! I used honey in mine, but you could use something else. I might try using golden syrup next time. I think the flavor of the honey is very strong in these, which I like a lot. Not a bad first try at making granola.

In a separate bowl, whisk together the vanilla, 4 tablespoons melted butter, ¼ cup honey, and water. Toss the wet ingredients with the oat mixture until the mixture is evenly crumbly. Press evenly into the prepared pan.

Bake the bars for 25 to 30 minutes, until just starting to brown and are bubbly around the edges. Remove from the oven and cool for 10 minutes.

After the bars have cooled 10 minutes, use a knife (or bench knife) to cut the bars while they're still warm. Let cool completely before removing from the pan.

Recipe from King Arthur Flour
Posted by Nicole at 6:00 AM

How funny - I was tidying up my baking supplies today and found my own bag of KAF jammy bits, and thought, "What was I planning on making with these?" (Other than oatmeal.) Now I know! The granola bars look really yummy.

I make granola often but have not yet tried granola bars. This looks like a good recipe. Thanks.
I love KAF, I wait for free shipping and order. Their Burgundy Chocolate Chunks are pure bliss!