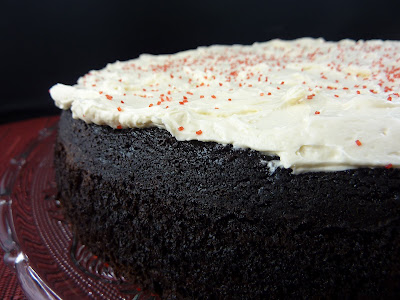 I often make birthday cakes for the people at work. One of my colleagues has a birthday on Valentine’s Day. I don’t really think that he wants gobs of pink for his birthday, so I wanted to make a more masculine-looking cake. I came across this cake and figured it would be great. I’ve long wanted to make a Guinness cake, ever since I went to a cooking class that featured beer pairings with every course. This one looked great and how could you go wrong with Irish Cream buttercream? Yep, that’s right, you can’t!

This cake is truly easy to make: one saucepan and into the oven it goes. I converted the weight measurements to volume, as that may be easier for you. I luckily have a scale with grams so I typically use that. Sometimes there is more freedom when just using weights because I don’t have to perfectly level the measuring cup or anything. This only uses about 8 ounces of Guinness, which I doubt you can buy in that small of quantity. My husband was happy to help relieve the burden of the extra Guinness in the refrigerator.

The buttercream here is Swiss buttercream, which takes some time and effort. You warm the eggs whites and sugar and then whip in a lot of butter. The first time I made this type of buttercream I was sure I had ruined it, but if yours looks questionable, just keep whipping and it will come out! It’s very rich and you need to pair the buttercream with the cake or it’s almost too much. (Almost!) Irish Cream buttercream is awesome, in case you were wondering. I topped it with some red sprinkles, for Valentine’s Day and it’s the perfect cake for celebration.

Preheat the oven to 350 degrees. Butter and flour a 9-inch springform pan.

In a large saucepan, combine the Guinness and the butter and heat until the butter is melted. Whisk in the cocoa and sugar. Combine the sour cream, eggs and vanilla in a small bowl and then whisk it in to the butter mixture. Whisk in the flour and baking soda until combined.

Pour the batter into the prepared pan and bake for about 45 minutes, until the cake tests done. Cool completely in the pan; it’s fairly fragile and will break if you try to remove it from the pan before cooled.

Make the buttercream: combine the egg whites and sugar in a medium–sized bow. Place the bowl over a pan of simmering water, making sure that the bottom of the bowl does not touch the water. Whisk the egg mixture until it is warm to touch and no granules of sugar can be felt (about 160 degrees).

Transfer mixture to a large mixer bowl, and using a whisk, whip at medium-high speed until soft peaks form. Once soft peaks have formed, start adding the butter, one piece at a time. Make sure the butter is incorporated before adding more. Your mixture may become watery, separated, etc. as you add the butter. Don’t worry! Keep whipping and it will come together. Add the Irish Cream and whip until incorporated.

Once the cake is completely cooled, remove it from the pan and place on a cake plate. Top with the Irish Cream buttercream, spreading on the top of the cake.

Recipe from Miso Bakes (Cake recipe from Nigella Lawson)
Posted by Nicole at 6:00 AM