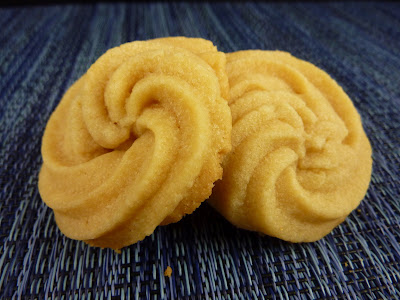 When I get home from work I often relax by pulling a couple cookbooks off of the shelf and browsing through them. This cookbook, which is from an Australian Women’s Magazine was given to me by my husband’s aunt who lives in England. I really love this book and I’ve made a couple of different cookies from it. It uses some different flavors and the ideas are just a little bit different than what you come across in most American cookbooks.

I had spied these cookies and thought that they just looked great and they used such simple ingredients that I had on hand. I had made another batch of cookies to take to work, but that batch turned out so small and I wanted to bring something else, too. I figured I would just whip these up and see how they turned out. The original recipe called for vanilla extract but I love almond extract and decided to substitute that here. It was a good choice!

These take no time, bringing the butter to room temperature would take the most time. (But I cheat and soften butter in the microwave.) The dough is tough to pipe, and you will discover muscles in your arm that you didn’t know that you had. I first started with a smaller fluted tip and it was just impossible to work with. I changed to the biggest one I had, which you’d typically use for cream puffs and it worked out. If the dough is just impossible, try to warm it buy keeping it in a warmer room or by microwaving for a couple seconds. Despite the work it takes to pipe these, they look so perfect and they were so well received.

In a large mixer bowl, cream the butter, almond extract and the brown sugar until light and fluffy. Stir in the flour until you have a soft dough.

Scoop the mixture into a piping bag fitted with the largest fluted tip that you have. Pipe swirls onto the prepared baking sheets. If it is difficult to pipe the swirls, either look for a larger fluted tip or allow the dough to warm a bit for easier piping.

Bake for about 12 minutes, until lightly browned. Allow to cool on the baking sheets.

Recipe from Australian Women’s Weekly Biscuits and Slices
Posted by Nicole at 6:00 AM