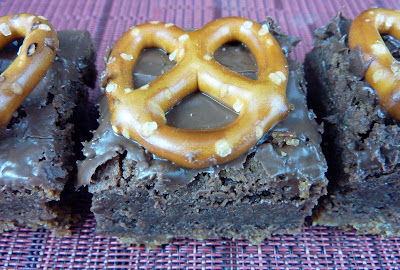 Whenever I buy a bag or pretzels, I inevitably forget about them and most of the bag goes stale. I just don’t know what it is about pretzels that I love them when I first eat them but then I get tired of them! The solution is to think of recipes that use up pretzels, and I found these and knew they would be perfect. I love anything with Nutella, and mixed with pretzels in a brownie seemed like a great idea.

I doubled this recipe, baking it in a 9” x 13” pan, but the recipe as written here is for the smaller pan. These are quite rich and a little goes a long way, so unless you are taking them somewhere that there are lots of people, you’d probably want to stick with the smaller pan. The only thing that was different in changing the pan was that the brownies took a lot longer to bake. I think I baked mine for 35 minutes or so, and they were still perfectly fudgy inside.

Preheat oven to 350 degrees. Line an 8-inch square baking pan with foil and spray the foil with cooking spray.

Carefully spread the brownie batter on top of the pretzel crust. Bake for 20-25 minutes, until a toothpick inserted in the center comes out clean. Allow the brownies to cool completely.

To finish the brownies, warm the Nutella in the microwave to make it easier to spread. Frost the top of the brownies with the Nutella. Top decoratively with pretzels. Cut into squares.

Recipe from Chef in Training
Posted by Nicole at 6:00 AM