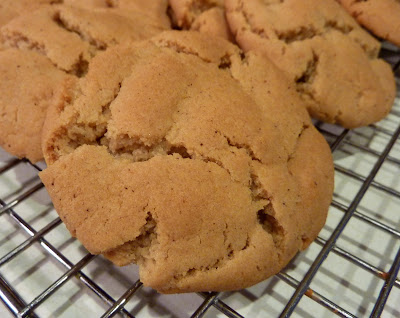 I really love a good ginger cookie, and while some people associate the spiciness of a ginger cookie with the fall or even the holidays, I love these flavors all year long. This is a traditional cookie from Cornwall, England, a popular summer spot in the UK. Thanks to technology and wonderful invent of electronic magazines, I’m able to subscribe to a couple of UK food magazines (for way less money than the print would cost). This recipe is from BBC Easy Cook magazine, which has great recipes that are pretty quick to put together.

This cookie is unusual that you make it in a food processor and then switch over to a mixer. You could cut in the butter by hand if you don’t have a food processor, but that would take a little longer. The original recipe had you add the sugar and golden syrup and stir by hand, but I could tell it would take a really long time for the dough to come together. The mixer worked great. I did have to add extra golden syrup, as my dough was way too crumbly after adding 4 tablespoons.

This makes a small batch of cookies: about 20. They taste good the first day, but they are much spicier the next day. They need a little time to sit and for the flavors to come together. I thought that the cookies would be crunchy, as most ginger cookies I’ve had in the UK are, but these are soft and fluffy. They do call for a couple of British ingredients: mixed spice and golden syrup, but you can make substitutions for those ingredients. I still cobble together my own “mixed spice” and it works just fine. I can’t always afford to travel the world, but at least I can bake some local favorites in my own home!

In a food processor, combine the flour, baking powder, baking soda, ginger and mixed spice. Pulse until combined. Add the butter and pulse until the mixture is crumbly. Transfer the mixture to a large mixer bowl. Add the sugar and stir to combine.

With the mixer running on low, add 4 tablespoons of golden syrup. Continue stirring, and adding more golden syrup if necessary, until the dough comes together.

Shape the dough into 1-1/2 inch balls and place on the prepared baking sheets. Bake for 8-10 minutes, until set. Allow to cool on the baking sheet for at least 5 minutes before removing to a wire rack to cool completely.

*Mixed spice is commonly used in British recipes. It is a combination of allspice, cinnamon, nutmeg, mace, cloves, coriander and ginger. For this recipe, I substituted 1 teaspoon cinnamon, ¼ teaspoon mace, ¼ teaspoon nutmeg, ¼ teaspoon cloves, and ¼ teaspoon allspice
Posted by Nicole at 6:00 AM

Those look amazing. The golden syrup is really the key in this.

For US readers - you can find golden syrup in Fresh & Easy stores, and World Market.

It's a game changer!