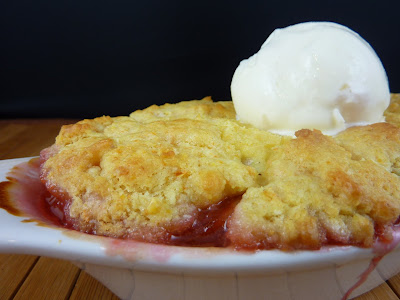 This week for Tuesdays with Dorie, we had the choice of making Raspberry Fig Crostata or to make Johnny Cake Cobbler. The crostata seemed a little more complex and I’m not the biggest fan of fresh figs so I opted to make the cobbler. It was easily scalable and I was able to cut down the recipe and make two little cobblers for me and my husband. I won’t post the recipe here, but you can find the recipe fairly easily with a search of the web. Also, make sure you check out the Tuesdays with Dorie site and see how the other bakers fared with these two recipes.

What makes this a Johnny Cake Cobbler is the cornmeal in the cobbler topping. The recipe calls for plums or apricots, but I think you could use just about anything. I used pluots, which were very nice. I cut the recipe in half and used 4 pluots. It seemed like there was too much topping, an opinion that was shared with a number of the other bakers this week. I kind of wished I would have spooned the topping on more thinly; in some spots, my cobbler topping did not bake all the way through.

I liked the pluots in this cobbler and I liked the sweetness of the cornmeal cobbler topping. Having some of the topping under baked wasn’t ideal, but I did like this recipe. Half of this recipe makes two quite large cobblers, which were a bit too big to eat at once. I think a smaller cobbler (mine were in 8 ounce containers) would be better. Next time, I will just not use quite so much topping.

Recipe from Baking with Julia by Dorie Greenspan
Posted by Nicole at 6:00 AM

Good idea to sub in pluots - they are so good. I did the same, made only two. There was a whole lotta topping. Though mine were browned on top, they did not cook completely either.

It was a lot of topping for the amount of fruit. And I found that the topping didn't bake all the way through.

will definitely have to try out the cobblers at some point... most people seemed to have liked it.
I baked up the crostata instead - it was more complicated. :(

Plouts sound delicious, even if I have never tasted them: they are interesting and hope to find some on our market soon.
We loved the cobbler and I'd like to bake the crostata soon.
The combo almond-sesam in the dough must be delicious.

The cornmeal in the topping does sound really interesting, I'd love to give this a go. I made the crostata this week, and it was delicious too.

Nice job. Will have to give the pluots a try in the future. We used peaches this time around, and that worked great as well.