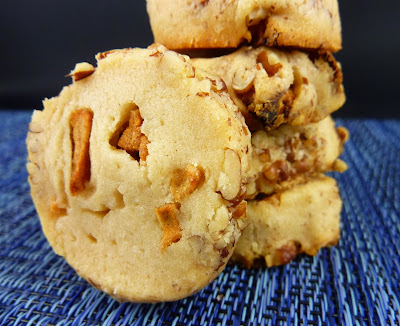 It’s fall, I’m back to school, it’s raining outside and it’s time for fall baking! I came across these cookies and thought that they had an interesting combination of ingredients. You don’t often see dried apples used in recipes. I’m not sure why they aren’t common. They are a great ingredient.

This is a slice and bake cookie, which is perfect when you’re busy. I had planned to make these one day and then bake them up the next, but of course I didn’t do that. I made the dough right when I got home from work and then sliced and baked them after dinner. Not too bad at all.

The dough is really sticky, so you may need to flour your hands a bit while shaping the dough. The original recipe has you add the pecans after you’ve chilled the dough. They don’t stick very well, so I think you could roll the dough logs in the nuts before refrigeration. They would stick better. They bake for a while, so you have to be patient while your house fills with wonderful aroma of cinnamon and nutmeg. The dried apples get toasty while baking, adds a really interesting flavor. You can taste the tang of the cream cheese combined with the wonderful apple flavor. These are quite the treat!

In a small bowl, combine the flour, salt, cinnamon, and nutmeg. In a large mixer bowl, combine the butter, cream cheese, sugar and vanilla. Beat on medium until light and fluffy. With the mixer on low, add the flour gradually until incorporated. By hand, stir in the dried apples.

Divide the dough in half; shape each half of the dough into a 2” diameter log. Wrap in plastic wrap and refrigerate until firm, at least an hour.

Remove the dough from the refrigerator. Remove the plastic wrap and roll in the chopped pecans. Slice into ¼” slices and place on the prepared baking sheets.

Bake for 16-18 minutes, until lightly browned. Cool for 5 minutes on the baking sheet before removing to a wire rack to cool completely.

Recipe from Baked by Rachel
Posted by Nicole at 6:00 AM

Oh hi there.
Those cookies need to be in my life (and belly)!