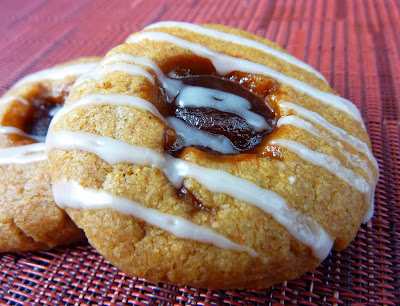 I saw these cookies and knew that I had a jar of apple butter in the refrigerator that I needed to use up. I used to really not like thumbprint cookies, but I have made enough different ones that now I have discovered that I do like thumbprints; I just don’t like a big glob of uncooked jelly. This recipe has you cook the apple butter with the cookie, which for me I knew that I wouldn’t get that nasty uncooked jelly sensation.

Upon further inspection, I discovered that these cookies called for a box of pumpkin spice pudding mix. I’d never heard of such a thing! I don’t really seek out pumpkin things, so that’s not surprising. I figured that I would maybe be able to find it in the holiday baking section of the grocery store. I did some online searching and found a store that was supposed to carry it and they had it. Had I not been able to find the pudding mix, I would have substituted a different flavor, probably vanilla or something like that.

These cookies require refrigeration, which for me wasn’t the best as I got a really late start on these. They aren’t too hard to put together, although I did have a bit of a powdered sugar storm when I was first mixing the butter and powdered sugar. The dough when it comes out of the refrigerator seems hard, but it softens once you shape the dough into balls. I made the thumbprints with a wooden spoon and then widened the imprint with my finger. The cookies have a crisp exterior with a soft center. The apple butter adds great flavor. I’m sure glad that I got over my aversion to thumbprint cookies!

In a large mixer bowl, beat the butter and powdered sugar until light. Add the vanilla and stir to combine. In a separate bowl, combine the flour, pudding mix, cinnamon, ginger, and salt. With the mixer running on low, gradually add the flour mixture and stir until incorporated. Wrap the dough in plastic wrap and refrigerate for about an hour.

Shape the dough into 1-1/4” balls. Place on the prepared baking sheets and flatten the dough slightly with your hand. Using your thumb or the handle of a wooden spoon, make an indentation in the cookies. Fill the indentation with a small amount of apple butter.

Bake for 10-12 minutes, until set. They will still be soft. Allow to cool on the baking sheet for 5 minutes before removing to a wire rack to cool completely.

Make the glaze: in a small bowl combine the powdered sugar, vanilla, milk and cinnamon. Whisk until smooth and then drizzle over the cooled cookies.

Recipe from Mother Thyme
Posted by Nicole at 6:00 AM

I love thumbprint cookies. The apple butter is a perfect combination for fall!