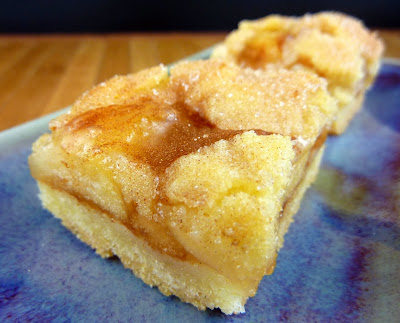 There are few things I love in the world more than snickerdoodle cookies and apple pie. I’ve made so many recipes for different types of snickerdoodles and many different apple desserts. My birthday is coming up and I wanted to make something just for me, so I decided to make these this week. The original recipe called for just three ingredients: pre-made sugar cookie dough, apple pie filling, and cinnamon sugar. I suppose I could have recreated the apple pie filling, but I didn’t. I knew it would be easy to make my own cookie dough, so I decided to do that.

Instead of using sugar cookie dough, I made a batch of snickerdoodle dough. These are supposed to be snickerdoodle bars, right? Why would I use sugar cookie dough? I get a little tired that snickerdoodle=anything with cinnamon sugar. I made a regular batch of dough and it was about 32 ounces, which worked just right for a 9” x 13” pan. The original recipe used less dough and a small pan but the same amount of pie filling. I like more cookie and not as much apple pie filling. I think too much pie filling would make it hard for the bars to bake all the way through.

These were easy to make, although the dough is pretty sticky and you have to be careful when you are pressing it in the pan. For the top crust, I wasn’t sure how to assemble it. I knew the apples wouldn’t be totally covered, but I didn’t want to leave too much uncovered. I pieced together the dough and ended up covering about 85% of the apples. It baked up nicely, and I hoped that the bottom of the bars would be done when the top looked done. They are pretty soft, but they baked up really well. I think these were 100 times better with the snickerdoodle cookie dough. I thought I would love these and I did; I hope you like them too.

In a large mixer bowl, combine the butter, shortening, sugar, and eggs; beat until creamy. In a separate bowl, combine the flour, cream of tartar, baking soda, and salt. With the mixer running on low, add the flour mixture and stir until combined. Do not over beat.

Bake for 35-40 minutes until the dough is baked and the bars begin to brown around the edges. Cool completely. Use the foil to lift the bars from the pan; place on a cutting board. Remove the foil and cut into bars.

Adapted from Freakin’ Fantastic Food Fun
Snickerdoodle recipe from The Betty Crocker Cookbook
Posted by Nicole at 6:00 AM